'Sea aliens' have been recently washing up on British shorelines, and Britons are warned of its deadly sting.

You might mistake them as an odd-looking jellyfish, but they are Portuguese man-of-war, group of animals that are closely related to jellyfish.

According to a conservation group, these deadly sea creatures with a very alien-like appearance are washing up along the shores "all over the North -West", and a single sting from their tentacles can kill. "These have painful sting which in rare cases can prove fatal. If you should happen to be stung, please seek medical attention right away," an old warning sign said. 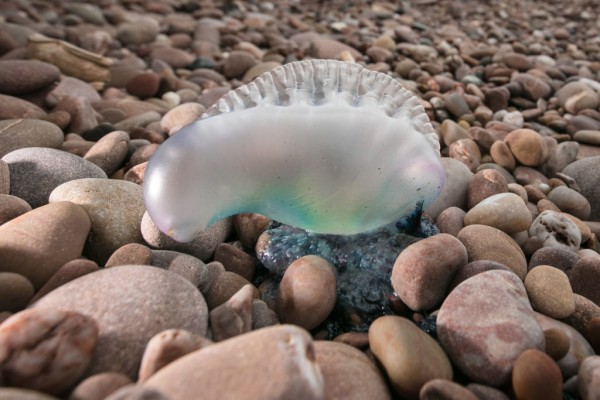 (Photo : Photo by Matt Cardy/Getty Images)
SIDMOUTH, ENGLAND - OCTOBER 17: Jellyfish that have been washed up on Sidmouth beach by yesterday's ex-hurricane Ophelia are seen in Sidmouth on October 17, 2017 in Devon, England. People have been warned to take extra care close to the coastline today after reports of deadly Portugese man o'war being washed inland by ex-hurricane Ophelia. The so called 'Floating Terror', which is in fact not a jellyfish but a floating colony, has long tentacles that can cause a painful sting and be fatal in extremely rare cases.

Common in Atlantic and Indian Ocean, Portuguese Men O' War (Physalia physalis) also venture into British waters. While they look like extraterrestrial invaders that will take over Britain, they are rather known as blue bottle jellyfish, but not exactly. Not only is it not a jellyfish, but 'it' is a 'they'. Actually, the Portuguese man o' war is a species of siphonophore, animals made up of a colony of organisms working together. They are distinguished by its balloon-like float, which may be blue, violet, or pink and rises up to six inches above the water line.

As a genetically identical groups of 'zooids' - clones, each of them in the colony serve different functions. The zooid acting as one, sometimes float in legions of 1,000 or more.

The Fylde Sand Dunes Project recently reported siphonophores have been washing up on British beaches and posted an official warning to people especially to their tentacles containing stinging nematocysts - microscopic capsules packed with venomous barbed tubes that could paralyze and kill small fish and crustaceans. The man o' war's sting is rarely deadly to people, however, its sting packs a painful punch and causes splotches on exposed skin.

Sea creature to avoid at the shore

US National Ocean Service said that sting is rarely deadly to humans, but is "excruciatingly painful."

"But beware - even dead man-of-wars washed up on shore can deliver a sting," they warn.

Even if they are dead, it is advised not to go near or touch them. If they feel threatened with anything from the surface, they deflate their air bags and briefly submerge. Its long tentacles can stretch up to 165ft in length, full of venomous nematocysts. On average, they grow up to 30 feet in length.

In case-to-case basis, their sting may have extreme, even lethal reactions to some people. One of the same was seen on the sandy beaches at St Anne's, just south of Blackpool. Fylde Sand Dunes tweeted: "Look at what's washed up on the shore at St Anne's.

Man-of-wars are found have no independent means of propulsion. With various forms and functions, they work together as one and either drift on the currents or catch the wind with their pneumatophores.