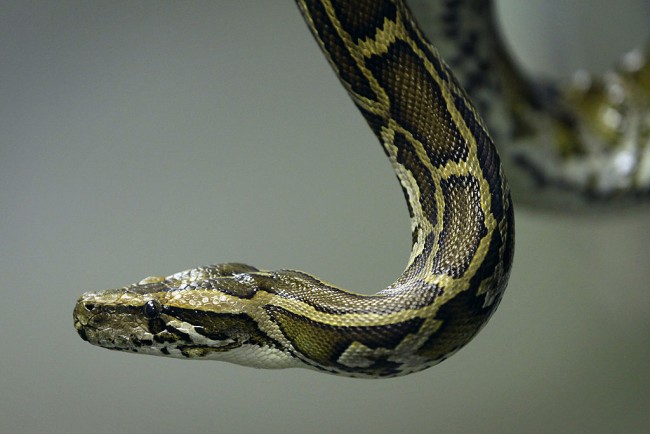 LONDON, ENGLAND - JANUARY 25: A Burmese Python is held at Heathrow Airport's Animal Reception Centre on January 25, 2011 in London, England. Many animals pass through the centre's doors ranging from exotic animals such as snow leopards and elephants, snakes and crocodiles, to the more common such as cats and dogs. In 2010 alone the centre processed approximately 10,500 cats and dogs, 1,300 birds, 105,000 day old chicks, 246,000 reptiles, 230 horses and 29 million fish. Most animals are part of zoo transfer schemes, the pet trade, or are pets in transit.
(Photo : Photo by Dan Kitwood/Getty Images)

Invasive to southern Florida, Burmese pythons have been taking a toll on the state's natural ecosystems for decades. For some reason, nature's one of the most formidable predators have recently come for the north, wreaking havoc on native species.

Several of the giant, in fact one of the largest species of snakes, have been sighted multiple times in Arthur R. Marshall Loxahatchee National Wildlife Refuge of Palm Beach County, Florida, most northern remnant of the historic Everglades wetland ecosystem.

South Florida officials are managing on how to refrain the pythons to expand further, although they have failed to contain the snakes in other parts of the state.

"We have finally, unhappily, sighted a Burmese python in the interior of the refuge," said Frank Mazzotti, a wildlife professor at the University of Florida.

Burmese pythons (Python bivitattus) are among the largest snakes on Earth. They prey on small mammals and compete with other native species for food, making them one of South Florida's growing concern since the 1980s.

The snakes were once used to being cared for by pet owners, whom had eventually grown tired on keeping the giant snakes, thus releasing them into the wild. It is also not uncommon that often times, the animal attacks its handler.

Since then, the invasive species had over-populated the Florida Everglades, slithering their way up across the region. Fun fact, the more or less 200-pound reptile is an excellent swimmer, and can stay submerged for up to 30 minutes under water before resurfacing.

A 2012 published study had linked the decline of many native species to the snakes. According to their record, the number of raccoons, opossums, and bobcats dropped to 99.3, 98.9, and 87.5 percent respectively since 1997. Subsequently, the timing and geographic patterns of the rapid decline concurred to the growing snake population.

Furthermore, some other species like marsh rabbits, cottontail rabbits, and foxes have also "effectively disappeared" significantly, and it turns out they have gone into the stomachs of Burmese Pythons, according to the study.

Consequently, Florida officials had put major efforts to control the python populations in the state through legal hunting. The Florida Fish and Wildlife Conservation Commission encourages hunting of the invasive snakes as humanely as possible, to remove the threat they represent to native wildlife.

"Pythons can be humanely killed on private lands at any time with landowner permission - no permit required- and the FWC encourages people to remove and kill pythons from private lands whenever possible," FWC stated in their site. Hunting can be done without bag limits and by any means, other than traps or firearms, unless provided for by a specific area regulation.

The program also includes free training for python hunting, as well as applying in a paid team to remove and turn pythons in to the FWC. FWS encourages more hunters to help remove invasive Burmese pythons in Florida.