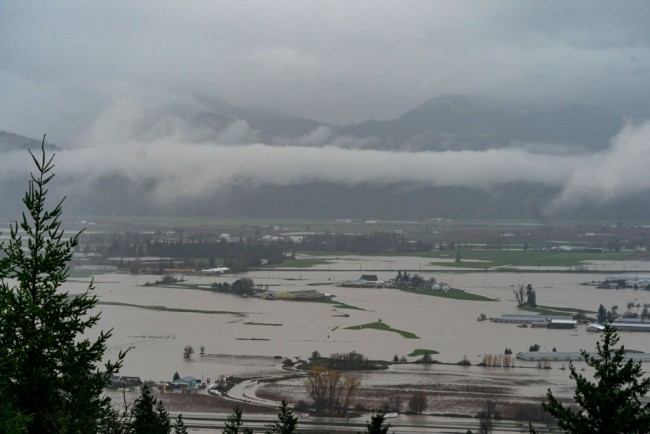 ABBOTSFORD, BC - NOVEMBER 18: Rain continues to fall as flood waters fill the Sumas area on November 18, 2021 in Abbotsford, Canada. Record rainfall this week has resulted in widespread flooding, mud slides and evacuation of residents in the area.
(Photo : Photo by Rich Lam/Getty Images)

Once in every 500 years, British Columbia faces a state of emergency of severe flooding and mudslides. Officials had recently reported at least one death and several others missing so far, but they said that death toll may arise in the Canadian province.

Around 18,000 people evacuated after severe floods and mudslides have destroyed homes and roads. Vast areas in Canada's westernmost province had been submerged by water, damaging vehicles and properties, and "claiming at least one life," said John Horgan, the province's premier.

The body of a woman was recovered from a landslide northeast of Vancouver British Columbia near the small community of Lillooet, while at least three people have gone missing.

"We expect to confirm even more fatalities in the coming days," Mr. Hogan said.

A state of emergency in response to "extreme storm"

Mr. Hogan tweeted: "This will help us secure supply chains and make sure essential goods and emergency services can reach hard-hit communities."

Evacuation orders and alerts are already in place to guide residents in this trying and dangerous times.

Canadian prime minister Justin Trudeau said his government would help the province recover from the "terrible, terrible disaster" that hit the region. As Ottawa sends hundreds of air force personnel to assist recovery, the prime minister told reporters that "there are thousands more on standby."

As strong rains, winds, and flooding linger in the region, roads and highways have become impassible and it got harder to get people to evacuation sites.

"It breaks my heart to see what's going on in our city," said Abbotsford Mayor Henry Braun said Tuesday.

Several towns in remote mountain areas are also in danger especially with limited access for aid and freezing temperatures.

Also read: Residents from the Northeast to Face a Weather Whiplash as Temperatures will Rise and Fall

British Columbia was just recovering from its 'biggest fire season' with almost 200 blazes across the province when this extreme flooding subsequently followed.

"The last few days have been incredibly difficult for British Columbians as we have experienced yet another natural disaster," said Mr. Hogan in a press conference on Tuesday

As floods and mudslides disrupted global supply chains from the country's largest port in Vancouver, outages in southern British Columbia are hindering the movement of goods and officials say it will take several days to clear track of Canada's two largest railways.

In addition, people in homes and businesses from the northern Washington city of Ferndale are urged to evacuate in an area near the rising Nooksack River. "These families and businesses need our prayers and support as we start the process of cleanup and rebuilding over the next few days," officials said on Facebook post.

According to Independent, the tormenting rains were caused by an atmospheric river - a huge plume of moisture extending over the Pacific and into Washington and Oregon.

"Rough. Kind of like a nightmare," said Bert Kerns, resident of Hamilton.

Also read: 'Sacrificial Zones' in US Put Thousands at Risk Due to Worsening Air Pollution