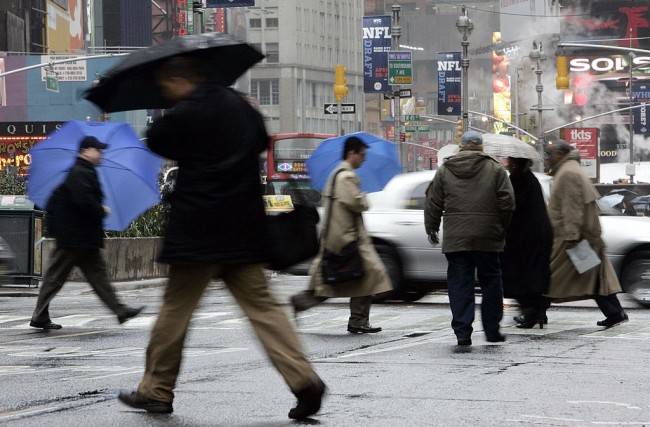 A serious condition of weather whiplash approaches the Northeast later this week, and AccuWeather forecasters remind residents to stay informed as temperatures rise and plummet like a rollercoaster ride.

Below average temperatures across much of the region will remain, however, forecasters say that Northeast expects a "topsy-turvy stretch in terms of temperatures" this week. An alternating warm and cold weather that will linger during the middle of the week, days after the coldest air of the season comes.

The warmth is expected to be short-lived as a cold front is around the corner, yet to pull temperatures down again.

A weekend storm drenches rain across the region

The National Weather Service (NWS) confirmed that at least 12 tornadoes struck the region on Saturday, making post-Halloween a tornado cleanup. While they say this is an 'unusual feat' for the middle of November, tornadoes were confirmed in at least three states, including Long Island, New York.

"Saturday's tornado outbreak was a wild event for any month, but especially noteworthy considering it occurred in November," AccuWeather Senior Meteorologist John Feerick said, noting that the outbreak was rare due to the meteorological conditions. "Usually, you think of tornadoes occurring with very warm and humid air in place, but this was not the case Saturday, with highs only in the 60s."

The severe weather across parts of the Northeast will bring unusually chilly conditions to the region through Wednesday morning.

"Temperatures began this week a general 3 to 6 degrees Fahrenheit below normal in the Northeast and across much of the mid-Atlantic states," said AccuWeather Senior Meteorologist Carl Babinski.

New York City and Philadelphia which typically have highs in the middle 50s during mid-November also struggles to approach 50 F temperature on Tuesday.

Warm trend across the region at midweek

By Thursday afternoon, many locations may bounce back into the 60s as warming temperatures build up across the region.

During this time, the Big Apple is forecasted to have highs in the middle 60s, over 10 degrees above average for the city. Meanwhile, the city of Brotherly Love could approach 70. The day earlier on Wednesday, Philadelphia will have temperatures in the 60s, with a high in the lower 60s.

In addition, more northern cities like Boston will likely feature temperatures in the 60s with an average high temperature of 51 for Nov. 18. "New Englanders may want to get outside and enjoy the mild weather because forecasters say the heavy coats will be needed by the weekend."

"A shift in the prevailing winds to the south and southwest will help pull this much milder air northward," Babinski explained. "A cold front is expected to trigger showers later on Thursday, Thursday night and Friday morning before the roller coaster makes a drastic dip once again."

"This weekend, most temperatures should be no higher than the 40s," said Babinski.

On Friday, high temperatures are expected to reach only in the 40s and 50s again along much of the Interstate 95 corridor and Appalachians.