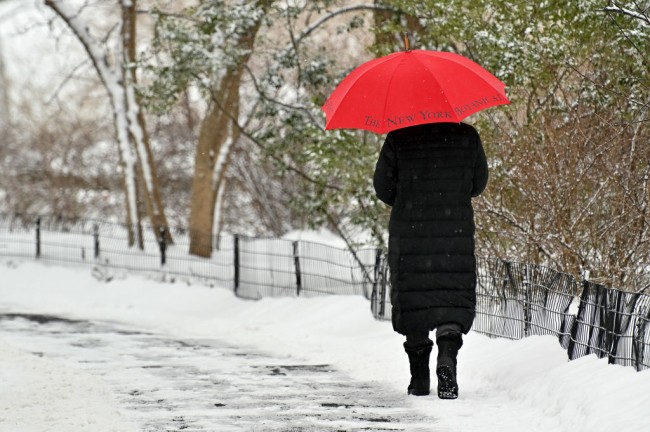 NEW YORK, NEW YORK - FEBRUARY 19: A person holding a red umbrella walks down a snowy path during a snowstorm in Central Park on February 19, 2021 in New York City. The U.S. National Weather Service issued a winter weather advisory that a total of 6 to 8 inches of snow is expected on Thursday and Friday in parts of the Northeast, including Southeast New York.
(Photo : Photo by Dia Dipasupil/Getty Images)

Authorities and experts warn the public for the coming possible crossing of an incredibly massive and strong storm.

Blizzard advisories have been issued for about 2 million individuals staying and residing throughout the Northern Hills and mountains up until the Upper Midwest part of the territory on early hours of Thursday, as well as the initial tropical storm forecasts of the weather.

Severe Storms in US

The season's probably major snowstorm is still months away. However, after receiving the go signal weather experts and analysts so as authorities combined, have decided snowstorm condition signs which was then issued for the regions specifically in the outrageous western Minnesota up to the land of northeastern South Dakota. Whereas the territories mentioned sits in snowstorm lane.

While before all that the other reports in the same situation today with the South Dakota was during the year 2008.

A wind gust of up to 50 mph according to analysts were to be expected up until the early evening of Thursday. Wherein weather warnings were also issued for thousands if not millions of inhabitants in the country.

The snowstorm, along with the gale force winds, will result in terrible eyesight and hazardous traffic scenarios.

It is to be expected that traveling on Route 95 would become hazardous, particularly although during early daytime commute within the first quarter of the first day.

Heavy Rainfalls to be Expected All Across United States

While it was said that 8 inches freezing rain were expected in extreme northern North Dakota and Minnesota.

As stormy weather had already been expected to turn to winter weather throughout the northern Plains and Upper Midwest by the 2nd quarter of the day Thursday.

Metropolitan corridor all across Washington till Boston, as well as the mid-Atlantic and Northeast will suffer from severe gusts and torrential downpours as the tropical hurricane will move eastward on Friday.

From 4:00 A.M. to 9:00 A.M. on Friday Washington might as well prepare for possible heavy rainfall. While in Boston the heaviest rain could start during the noontime on Friday until 4:00 P.M. the same day. It was said that from the time 5:00 A.M - noon time of Friday New York may experience heavy rainfall.

This is all according to the recent broadcast which the forecasters have presented regarding the possible heaviest rainfalls is expected to pour in the region.

However, the fact of the matter is considering this is an incredibly quick weather patterns, almost all rainfalls is expected to be all over the East Coast by late Friday afternoon or early Friday evening.

Annual precipitation quantities throughout the hurricane's path will be 1 to 2 inches on average, with domestically greater amounts likely.

And as is typically the occurrence with such big autumn weather events, minimum conditions will rush around after the cyclone as the precipitation leaves, erasing the balmy and above-average conditions that have governed the eastern part of the continent this week and replace them with a November frost.