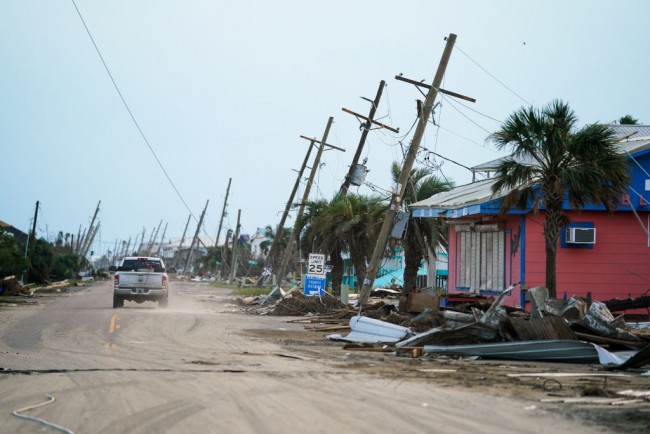 GRAND ISLE, LA - SEPTEMBER 4: A motorist drives down a road in the wake of Hurricane Ida on September 4, 2021 in Grand Isle, Louisiana. Ida made landfall as a Category 4 hurricane six days before in Louisiana and brought flooding, wind damage and power outages along the Gulf Coast.
(Photo : Photo by Sean Rayford/Getty Images)

Another typhoon with the name Hurricane Ida, hit Louisiana in the month of September which is considered as a state still reeling from last year's hurricane season with three consecutive landfalling storms.

The researchers looked at hurricane seasons from the year 1979 throughout the year 2020, focusing on years where at least two tropical storms hit the same area within just two weeks of each other. Residents will face dangerous conditions if it takes 15 days to restore infrastructure.

As the world's climate changes, more tropical storms have been packed into a single hurricane season, which typically runs from June to November in the Gulf region.

Communities and infrastructure have less time to recover between disasters when two storms hit in fast succession, which is a serious challenge for a region with a growing population that has struggled to recover from prior natural disasters.

According to new model estimates, Louisiana and Florida could be more likely to experience two tropical storms that make landfall within nine days of each other by the end of the century.

Despite the prolonged hurricane season, the number of tropical storms is expected to increase dramatically, according to Dazhi Xi, a climate scientist at Princeton University who led the study.

Xi discovered that many tropical storms are most likely to hit Louisiana and Florida, but storms will hit the entire coast.

While as to the new data published in the AGU journal Geophysical Research Letters, which publishes high-impact, short-format research with urgent implications, the duration between storms in the region is reducing all from Space and Earth.

The states most likely to see sequential landfall are Florida and Louisiana, where one hurricane advances over land quicker than infrastructure damaged by a previous storm can be restored.

Adaptation to Changes Cause by the Hurricanes

The demands on infrastructure, ecosystems, and people are amplified when the storm season lengthens and the time between disasters shortens.

In a community without power, transportation, or communication systems, health risks, rescue and clean-up operations, and rebuilding systems are all magnified by consecutive tropical storms.

People have mostly focused on the resilience of infrastructure, the time it takes to restore it after a storm, and the cost of doing so in prior studies as Dazhi Xi.

"That's why mass migrations exist: they're people who have been displaced because they can no longer live in a neighborhood due to changing climate conditions, and we can't have individuals living there if we can't even put power grid structures back in place, provide adequate housing, or to provide water and other resources."

The need to focus on faster disaster recovery timeframes was underscored earlier this year by an unprecedented cold spell in Texas in February, which knocked down much of the state's electricity grid.

The duration between tropical storms making landfall in the Gulf Coast has already been increasing shorter during the last four decades. Xi used a weather model to predict how the frequency of back-to-back hurricanes will change over time based on how that number fluctuated over time.

"Even the best-case scenario of this the worst scenario means disaster for the shore," Trepanier added.