In the past 2000 years, volcanic eruptions contributed to collapse of China's most powerful dynasties and a study found that this resulted to temporary global cooling and affected agriculture.

Zhejiang University researchers conducted several analyses of historical atmospheric sulphate levels in ice cores extracted from both Antarctic and Greenland, reconstructed 156 of the world's explosive volcanic eruptions between 1-1915 AD, and analyzed Chinese documents in detail about the history of 68 dynasties from 850-1911. 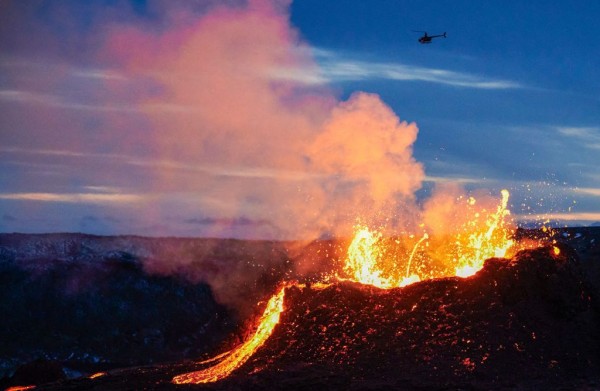 (Photo : Photo by HALLDOR KOLBEINS/AFP via Getty Images)
TOPSHOT - A helicopter flies near above the lava flowing from a fissure near the Fagradalsfjall on the Reykjanes Peninsula in Iceland on ,April 6, 2021. - The volcanic eruption, which has been ongoing for more than two weeks in Iceland about 40 kilometers from Reykjavik, spread on April 5, 2021 with a new fault spewing lava, according to the meteorological institute.

"We confirmed for the first time that collapses of dynasties in China over the last 2,000 years are more likely in the years after volcanic eruptions," said co-author Alan Robock, a Distinguished Professor in the Department of Environmental Sciences in the School of Environmental and Biological Sciences at Rutgers University-New Brunswick.

"But the relationship is complex because if there is ongoing warfare and conflict, dynasties are more susceptible to collapse. The impact of a cooled climate on crops can also make conflict more likely, further increasing the probability of collapse."

Major volcanic eruptions lead to "a double jeopardy of marked coldness and dryness during the agricultural growing season," the study says. In fact, the fissure volcano in Iceland, the largest volcanic canyon in the world which erupted 4.3 cubic miles of magma, led to one of the coolest summers for 1500 years.

Meanwhile, "smaller volcanic 'shocks' to the climate may cause dynasties to collapse when political and socioeconomic stress is already high," scientists say.

According to researchers, some of Imperial China's most powerful dynasties were often resilient against climate shocks, but eventually caved after numerous large eruptions.

"This study tells us how important it is to build a resilient society to cope with the natural hazards that we face, be they volcanically-induced or otherwise." said Professor Chaochao Gao of China's Zhejiang University.

Chinese dynasties had a political philosophy used in ancient and imperial China called 'Mandate of Heaven', which influenced continuity between dynasties. An accepted rule that a new dynasty, by seizing power, demonstrated a divine mandate to rule what the former dynasty had lost.

Although China had a history of resource mismanagement, the study emphasized the importance to bounce back and prepare for future eruptions, especially in economically-vulnerable regions.

"We have been lucky in the 20th and 21st centuries in that recent volcanic eruptions have been smaller than those that occurred during China's Imperial period," Professor Gao said.

However, researchers linked Sahelian drought of the 1970s-1990s to moderate volcanic eruptions, resulting to more or less, 250,000 deaths and 10 million refugees in marginalized region.

"This study shows a repeated link between volcanic eruptions and dynastic collapse."

Also read: Toxic Trees: 'The Tree of Death' Known to be So Deadly You Can't Stand Under it