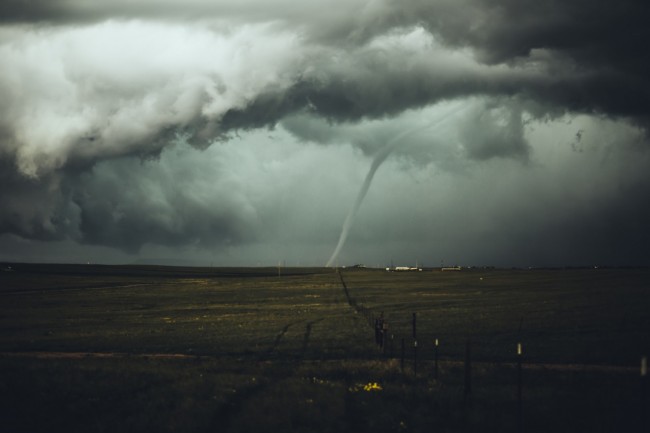 A large waterspout spun off the coast of Vancouver, Canada late Saturday afternoon, sighted through Canada's Vancouver International Airport. Some travelers witnessed the unexpected sight of an apparent funnel cloud over the water, while lightning strikes just outside the busy travel hub.

Environment Canada confirmed that the waterspout formed over the Georgia Strait just west of Vancouver International Airport and ultimately moved to the north toward West Vancouver and the mouth of the Howe Sound.

Airport holds flight 'out of an abundance of caution'

A spokesperson for the airport emailed CTV News Vancouver that a 'weather event' near the airport caused aircraft to be directed into a holding pattern Saturday evening "out of an abundance of caution."

"All aircraft landed safely and airport operations were not affected," the spokesperson said.

"Current indications are that it is weakening but the atmospheric conditions are favourable for the development of waterspouts or weak funnel clouds over the next few hours," the weather agency said. "This is a dangerous and potentially life-threatening situation."

While the weather service warns residents to be prepared for a severe weather, the twister slowly moved away from the airport as of Sunday, maintaining no injuries or damages.

A waterspout is basically a tornado over water. It shares the same structure with a tornado but forms over body of water instead of over land. In fact, this weather pattern is no stranger across the Great Lakes region.

They occur infrequently across the greater Vancouver area "but under the right atmospheric conditions they can spin up from time to time," according to AccuWeather Senior Meteorologist Dan Pydynowski.

"Cold, unstable air above the surface and a prevalent spin in the atmosphere combined to create conditions conducive for a waterspout to spin to life on Saturday," Pydynowski explained.

Waterspouts are rare across Canada

If you compare it to U.S., waterspouts and tornadoes are 'climatologically rare' across Canada. The Northern Tornadoes Project, a research group founded in part by Ontario's Western University, Canada, reported 90 confirmed tornadoes and waterspouts in the region this year. Meanwhile, U.S. had 146 preliminary reports of tornadoes in just the month of October.

According to data from the Storm Prediction Center (SPC), the preliminary count for tornadoes in 2021 in the U.S. stood at 1,149 as of Nov. 1.

Environment Canada always advises precautions if a tornado is approaching. Fortunately, the tornado watch issued only lasted for less than an hour and had been removed from the public alerts section on the Environment Canada website.

However, a special weather statement has been issued to several coastal regions of British Columbia, Canada's westernmost province, for high winds expected on Monday night.