Dr. Anthony Fauci is under pressure by senators on the both sides of the political aisle to reveal details more about suspected usage of a research and clinical trials on puppies.

As Fauci has been widely criticized for allegedly funding inhuman testing on dogs with taxpayer dollars.

On Friday, republican and Democratic legislators wrote to President Joe Biden and the National Academy of Allergy and Contagious Diseases, demanding that researchers disclose details about the accused parasitic virus of the 44 beagle puppies in order to examine an unconventional medication on them.

Legislators Demand the Stop of Inhuman Experimental Research on Puppies 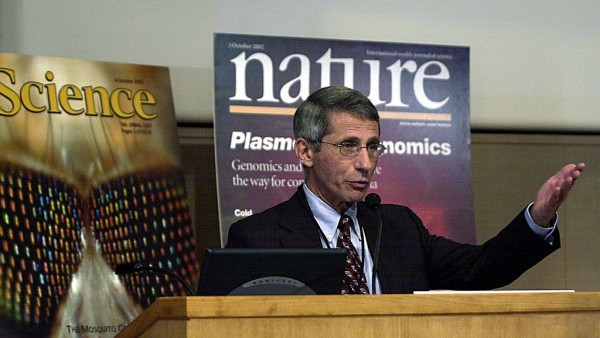 (Photo : Photo credit: JOYCE NALTCHAYAN/AFP via Getty Images)
WASHINGTON, : Director of the National Institutes of Allergy and Infectious Diseases Dr. Anthony Fauci speaks to reporters during a press conference, 02 October 2002, in Washington, DC, on the sequencing of the genome parasite Plasmodium falciparum and the genome of the main mosquito vector for malaria.

The petition endorsed by Republican South Carolina Rep. Nancy Mace and 23 additional legislators expressed their extreme worry regarding the allegations of invasive, inhumane, as well as wasteful tax-payer-funded animal experimentation conducted by the National Bureau of Allergy and Viral Infections.

The notice goes on to say that cordectomies were done on six- to eight-month-old canines, as per invoices received through a Freedom of Information ActT request.

"As you seem to be probably informed, a cordectomy, further identified as 'devocalization,' encompasses separating a dog's vocal cords in hopes of preventing them from barking, howling, or weeping," the memo says, adding that institutions such as the American Veterinary Medical Association and the American Animal Hospital Association are opposition to the treatment plan.

The request came after the White Coat Waste Project accused Fauci and the National Institute of Allergy and Infectious Diseases of using public funds to subsidize a "futile and violent" study on beagles through facilities in Africa, California, Georgia, and Maryland.

As the news goes to the public many shows their anger on social media websites such as twitter.

People on social media have been using the hashtag #Fauci to condemn Fauci when news surfaced that large number of government funds were spent to put dogs to inhumane experiments until murdering animals.

Furthermore, Fauci has been chastised since an NIH representative claimed to acknowledge that taxpayers sponsored coronavirus acquisition of functionality studies at a lab in Wuhan, China, notwithstanding Fauci's frequent statements to the contrary.

In July, Republican Sen. Rand Paul asked the Department of Justice to file a judicial complaint to Fauci for lying to Congress regarding NIH-funded gain of function studies.

According to a public statement from Boyle's department, Mace and Democratic Pennsylvania Rep. Brendan Boyle initiated the Animal Freedom from Diagnostics, Experimentations, and Scientific studies (AFTER) Act on the 14th of September, that also instructs state and legislative agencies "to establish and maintain" regulations enabling animals no longer necessary for exploration to be embraced or retired.

The petition goes on to ask the number of times the drug trials have been done on dogs ever since start of 2018, how much public funds has been wasted on these trials, and why surgeries like cordectomies are used when they are "medically unnecessary," among several other things.

The Washington Examiner sought response from Rep. Nancy Mace's department and the National Institute of Allergy and Infectious Diseases, however failed to receive a reply right away.