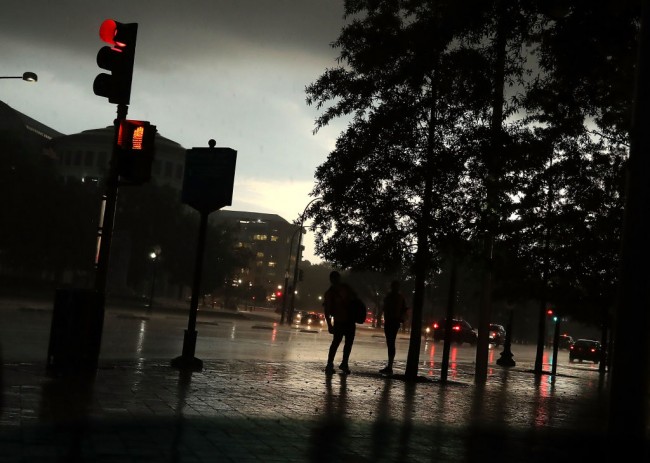 WASHINGTON, DC - MAY 14: People stand under a tree as rain starts to fall as a severe thunderstorm passes over the U.S. Capitol, on May 14, 2018 in Washington, DC. The area was hit with heavy rain and high winds from the early evening storm.
(Photo : Photo by Mark Wilson/Getty Images)

Throughout midweek, intense thunderstorms potential of generating hurricanes, lightning, and destructive gusty winds will move across the central and eastern United States.

From across central and eastern United States, a succession of thunderstorms rushing throughout the region will lay the setting for waves of catastrophic thunderstorm formation and heavy downpours until midweek.

On Sunday, the first wave of thunderstorm occurrence blazed to existence throughout distant northeastern Kansas before crossing jurisdictional boundaries into northern Missouri. Massive storm and tornado advisories remained in effect across Missouri as further thunderstorms exploded during whole afternoon and evening.

Tornadoes proceeded to push eastward by Sunday evening, triggering tornado watches in the St. Louis metropolitan parts of the city southern outskirts. Sunday evening, news of serious destruction from a possible cyclone emerged out of St. Mary, Missouri. Upon moving across Missouri, thunderstorm violence proceeded to spread through central and southern Illinois on Sunday night.

Towns spanning Route 80 from Des Moines, Iowa, to Cleveland, Ohio, had persistent rainfall during the day on Sunday, dumping at minimum 1-3 inches of water across a huge spectrum along this route. Rainfall may continue to fall in this sector in a west-to-east direction during the day on Monday, but not until an AccuWeather Topical StormMaxTM of 8 inches is likely in certain regions.

Whereas the environmental setting for bad thunderstorms on Monday may not be as dramatic as it was on Sunday, all of the components for devastating storms will be present. The possibility of destructive strong winds, precipitation, and an occasional tornado extends over the Ohio and Tennessee River basins, the southern Appalachians, and into the Carolina piedmont.

Extreme Rainfall to be Expected to Last Till Next Week

A continuous, drenching rainfall will pour north about where the tropical storm danger is located. From the Great Lakes into New England, a grey, chilly, wet and nasty Monday is in store.

As the disturbance moves away from the East Coast, the chance of heavy downpours will reduce over the Eastern territories by Tuesday. Stormy weather is anticipated to stay to be a problem in New York City and Boston as the weather intensifies and takes on the features of a nor'easter off the coast.

On Tuesday, the attention will return to the Plains, where strong rains are expected. The bomb blizzard that brought torrential rainfall to the West will begin to move out of the Rockies and towards the Plains, laying the groundwork for the next round of extreme storms.

During midweek, an environmental surprise might join the scene throughout the southern Plains and Gulf Coast regions, as Hurricane Rick's residual upper-level strength is predicted to rise north of the Mexican boundary. The probable connection between both the thunderstorm fleeing the West and what remains of Rick might result in another wave of bad thunderstorms throughout the South on Wednesday.