Colder Conditions and First Frost to Hit the Northeast

The usually warm Northeast is likely to have its first frosty season as colder conditions progress across the region, AccuWeather meteorologists say. They forecast that Northeast states will not just be seasonably cold, but also really chilly with some brief snowfall in some locations for two consecutive weekends.

Meanwhile, thunderstorms, rain, and gusty showers are in store for Wyoming and other warm states in the east this Thursday, including parts of Ohio, West Virginia, western Pennsylvania and western New York state. 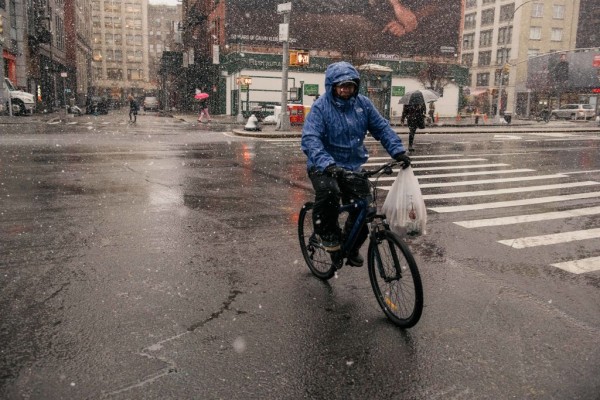 (Photo : Photo by Scott Heins/Getty Images)
NEW YORK, NY - DECEMBER 02: A delivery worker rides a bicycle on Houston Street during the first snowstorm of winter in Manhattan on December 2, 2019 in New York, United States. Up to four inches was predicted to fall in New York City during the storm, which has caused serious travel delays along the East Coast and dropped up to 27 inches of snow on parts of New England.

Temperatures in northeast will drop as early as this weekend until next week, plummeting to 15-30 degrees Fahrenheit from Thursday to Sunday. In fact, snow showers could coat the ground over the higher terrain of the Adirondacks and the Green and White Mountains of New England, and a preview of winter precipitation is in the corner for Saranac Lake, New York; Montpelier, Vermont, and Caribou, Maine.

A true taste of Autumn

AccuWeather Senior Meteorologist Joe Lundberg said that this new chilly pattern in the second half of October is not 'abnormal', "but what makes it stand out is the lack of chilly air so far this season for the Northeast."

As far as above average temperatures for this month are concerned, the first half of October had been incredibly warm. So far, this month have averaged 5 to 10 degrees above normal for much of the region, regardless of the temperature dip in the past weekend. Which makes this new wave of chilly air a 'true taste of autumn' to the Northeast.

Also read: People's Perspective on Environmental Conservation May be Linked to Genes

Several locations in the interior Northeast will experience widespread frosts and freezes early in the week, determined by cloud cover and winds, according to Lundberg. Which means the cold air will not pool around valleys.

"The outbreak of chilly air from this weekend to early next week will mark the end of the growing season from the northern tier of Pennsylvania and upstate New York to northern and the interior of central New England, where lows will range from the mid-20s to the lower 30s," says Lundberg. "This is happening right around the normal time or perhaps a bit later than average in some cases," he added.

On the other hand, temperatures are likely to remain high enough to prevent a frost in major urban areas and along much of the heavily populated Interstate-95 corridor. Clear skies and cold air turn to clouds and spotty rain in the area, however, if the same storm system was to occur later this autumn, it might be able to produce the region's first snowfall this year.