An outbreak of Salmonella tied to whole red, white and yellow onions has sickened more than 650 people in 37 states.

The Centers for Disease Control and Prevention stated that the Salmonella epidemic linked to entire red, white, and yellow vegetables has affected over 650 individuals in 37 jurisdictions.

According to an announcement from the department, the onions were purchased from Chihuahua, Mexico, and marketed by ProSource Inc. 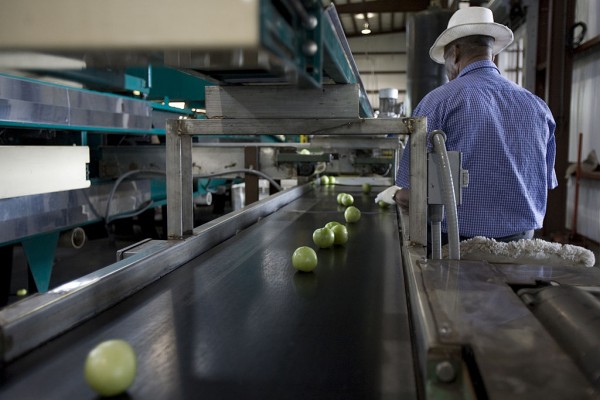 (Photo : Photo by Robert Browman/Getty Images)
PALMETTO, FL - JUNE 21: Tomatoes are inspected as part of quality control at West Coast Tomato June 21, 2008 in Palmetto, Florida. The Food and Drug Administration sent officials to Florida and Mexico to investigate tomato farms as part of a salmonella probe. Over 550 people in the US and Mexico have been sickened with salmonella because of tainted tomatoes.

Specific details regarding the contaminated onions say that it may contain a stamp or package with the company's name which is the ProSource Inc. and place of origin information, Mexico.

Due to the incident the CDC advised individuals and home owners to throw any entire red, white, or yellow onions they had at residence if they did not have a tag or labeling specifying its origin.

In the report made by the health officials there are a total of 652 instances have been linked to the plague. While there were 129 hospitalizations among these patients, but no fatalities have been documented.

Authorities believe the quantity of persons afflicted in the epidemic is substantially greater, in particular since many individuals who become infected might recuperate whilst being diagnosed for Salmonella.

The CDC originally launched its inquiry into the Salmonella epidemic on the 17th of September, however the origins was not yet established.

Investigators have now identified onions as the culprit of about 75% of vulnerable patients interviewed mentioned regularly eating onions or foods including raw onions before being unwell, according to the claim.

According to the CDC, assessments for salmonella inquiries might actually occur weeks after a patient falls ill, but not everyone remembers all of the items they ate before becoming sick, which might also indicate why 25% of patients did not recall consuming onions.

Furthermore, individuals are often not conscious of all the substances in the meals they consume.

While other persons who've become infected mentioned dining at same establishments. Most of these eateries, it found out, were provided by ProSource.

The exact variant of Salmonella causing illness, Salmonella Oranienburg, was also found in a spice container with remaining cilantro and lime taken from a symptomatic patient's residence. As per the CDC, the commenter noted that the packaging also had onions, but no onions remained.

The onions in question have been issued a recall by ProSource. According to the firm, the latest batch of onions it got from Mexico was delivered on the 27th of August in year 2021.

According to the warning, since these onions may stay for about three months, they may still be in households and small enterprises.

The report also says that majority of individuals who become ill with Salmonella recuperate in four to seven days with no special therapy.

Salmonella is more likely to cause serious disease in children, the elderly, and persons with impaired immunity.

Moreover, the  CDC believes that serious sickness indicators include a temperature of more than 102 degrees Fahrenheit  or about 38.8 degrees Celsius, bloody diarrhea, heavy nausea, and exhaustion.

Experts are still looking into if more onions or sources are involved in the epidemic.