7.1 Magnitude Earthquake in California Leaves Big Cracks on the Ground as Seen from Space

It's not tourist spot, but a handful of Californians visit occasionally the large crack left by the 7.1 magnitude earthquake that rocked California in July 2019. Although the quake did not harm a human being, it did create a fissure so big that you can see it from outer space.

In 2019, California had its one of the largest earthquakes in 20 years, near Ridgecrest area in the Mojave Desert. It had relatively minor damage but created a fissure that measured around two inches wide but gets deeper as it stretches out. 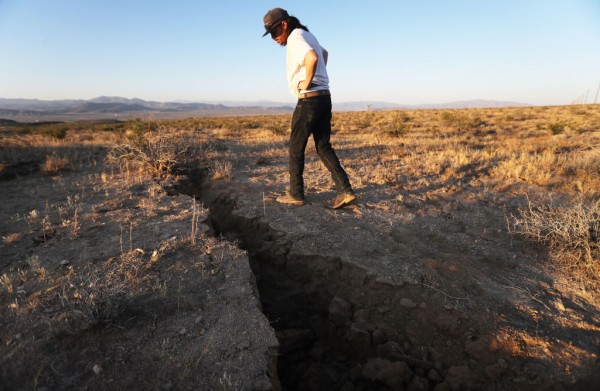 (Photo : Photo by Mario Tama/Getty Images)
RIDGECREST, CALIFORNIA - JULY 04: A local resident inspects a fissure in the earth after a 6.4 magnitude earthquake struck the area on July 4, 2019 near Ridgecrest, California. The earthquake was the largest to strike Southern California in 20 years with the epicenter located in a remote area of the Mojave Desert. The temblor was felt by residents across much of Southern California.

The Planet Labs was able to capture a satellite image of the crack close to the epicenter of the 2019 California earthquake. Planet Labs Chief Executive Will Marshal shared a before and after satellite imagery on the social media platform, Twitter. He wrote: "Ridgecrest Earthquake before (4th July) & after (6th July) images from Doves, clearly showing surface rupture."

The crack that goes through the Mojave Desert eventually became a local attraction.

Low chance of having the same shake

According to the United States Geological Survey (USGS), the Ridgecrest Earthquake is a result of shallow strike slip faulting in the crust of the North America plate and "earthquakes of this size are more appropriately described as slip over a larger fault area." Although to identify the causative fault of an event of this kind requires more detailed studies.

"This region of eastern California has hosted numerous moderate-sized earthquakes," the USGS said on its website. "Over the past 40 years, prior to the July 4th event, 8 other M5+ earthquakes have occurred within 50 km of the July 6th, 2019 earthquake. The largest of these was an M 5.8 event on September 20, 1995, just 3 km to the west of today's event, which was felt strongly in the China Lake-Ridgecrest area, and more broadly from Los Angeles to Las Vegas."

California earthquakes are wake up calls

State Governor Gavin Newsom said following the Ridgecrest Earthquake that it was a call for help and it is the governments' responsibility to make efforts in strengthening the alert systems and building codes in the state.

"It is a wake-up call for the rest of the state and other parts of the nation, frankly," Newsom said at a news conference after the earthquakes.

Egill Hauksson, a Caltech seismologist added that quakes of this kind have aftershocks that could last for months, if not years.

While California is a well-known Eartquake zone, it is impossible to miss the 2019 quake. Ridgecrest has been near the epicenter of major earthquakes, including one in 1995. These quakes are preceded by a short series of small foreshocks followed by a robust sequence of aftershocks.

However, California earthquake scientist Lucy Jones of USGS says that the 7.1-magnitude quake "probably" would not trigger more quakes or larger quakes outside the area of Ridgecrest, California.