Large number of small pieces of toxic garbage have just been recently learned within the food of beluga whales, demonstrating that contamination in sea creatures is starting to spread to even the most isolated Regions of the world.

Microplastics have been discovered from even the most distant seas, according to Simon Fraser University researchers who investigated how well the fragments get into the bodies of beluga whales via food. 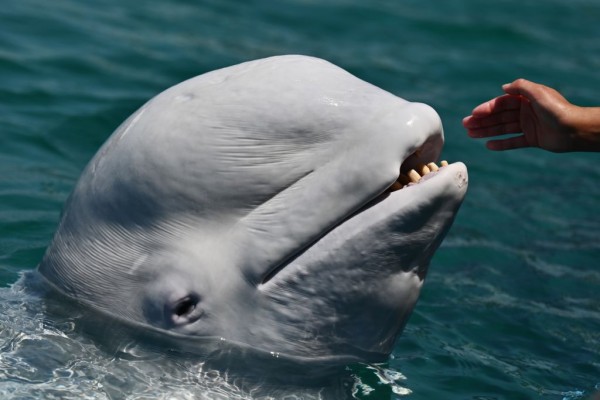 (Photo : Photo by CHARLY TRIBALLEAU/AFP via Getty Images)
A keeper cuddles a beluga at the Hakkeijima Sea Paradise aquarium in Yokohama, suburban Tokyo on May 14, 2020.

Recent research published in the journal Science of the Total Environment examined 5 Arctic marine animals renowned to also be consumed by beluga whales.

Nanomaterials were detected in the digestive systems of 21% of the sea creatures examined.

Considering combining of the discoveries of the researcher's prior studies on the quantity of marine debris discovered in beluga stomachs, scientists determined that perhaps the whales consume up to 145,000 pieces of plastic each and every year.

Rhiannon Moore, the experiment's main proponent, notes that although the potential medical effects on belugas are unclear, the data highlight how widespread polymers are.

"I was startled when we initially looked into 7 separate beluga abdomens and discovered microplastic particles throughout all of the 7 species. These were creatures located in extremely isolated northernmost locations, and it's not just one form of polymer that we discovered "Moore, who already earned a master's degree in science at SFU, adds

This is the very first exploration to find plastic particles in the bellies of sea creatures from the Eastern Beaufort Sea, which is situate in the north part of the Northwest Territories, Yukon, and Alaska.

Nano plastics filaments, which are prevalent in textile materials and clothes, accounted for 78% of the particulates detected in animal bellies.

The presence of microplastic particles in seas is a growing sustainability catastrophe, according to Moore, and researchers indicate that none is exempt.

"People consume too far more polyester in modern culture, and when it is incorrectly disposed, it breaks down into tiny and finer particles, making it simple to transfer in aquatic settings," she explains. "The findings of these research only serve to highlight the fact that substances do not stay inside one spot. They travel throughout the atmosphere, the waterways, the soil, and we now know they go through the marine food web."

Moore, who has become a Zero Plastic Advocacy Supervisor with the City of Victoria, says the investigations just give a glimpse in history and that scientists do not even know how much longer plastic particles may remain in creatures' intestinal systems or whether they might be dangerous to the sea creatures' health.

However, it highlights the need for mankind to create a bigger commitment to decrease the quantity of plastic garbage we create.

"This research contributes to our wide assortment of contaminants that wind up in the Arctic and underlines the need for prompt attention to halt the discharge of polymers and microplastic particles in the more heavily populated south," says Peter Ross, senior scientist at Raincoast Conservation Foundation and study co-author.