Set off 8km of Iran's coast is a ruby-red mountain, so rich with minerals that it was called a geologist's Disneyland.

The Hormuz Island is Iran's 'mysterious, mineral-laden landscape' with teardrop-shaped shimmering salt dome embedded with over 70 minerals, accounting for its various shades of red, purple, yellow, ochre and blue. The 42 sq km island imparts a story from hundreds of millions of years ago. 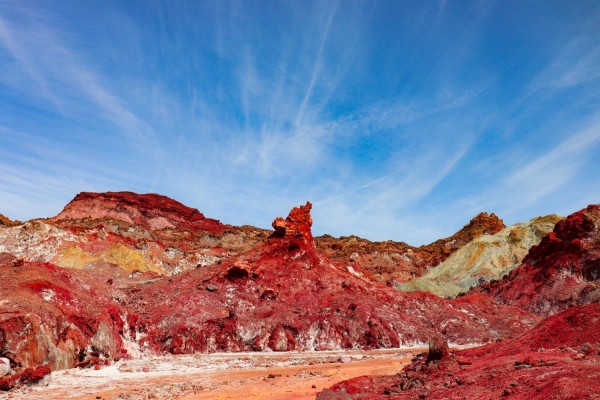 "Over the last 500 million years, the salt layers were buried deeply by younger layers of volcanic sediment. Since the salt is buoyant, over time, it has risen through cracks in the overlying rocks to reach the surface and form salt domes," said Dr Kathryn Goodenough, principal geologist at the British Geological Survey who has previously worked in Iran.

"These thick layers of salt, many kilometers below the land, are actually present across much of the Persian Gulf area," she adds.

The ochre-stained streams, crimson-hued beaches and enchanting salt caves, are only a result of its geological makeup. It was also thought to be a home of the only edible mountain in the world.

Its minerals can also be of valuable uses. For instance, its red soil called gelack plays an important role in local cuisine, used as spice to curries and local breads tomshi, which means 'a handful of something'.

"The red soil is used as a sauce," explained Maryam Peykani, Farzad's wife. "This sauce is called soorakh and is spread on flatbread as it is almost cooked." Apart from that, the mineral is also used by local artists as paint, dye, or creation of ceramics and cosmetics.

Also read: Waterspouts: What You Need to Know About the Shifting Weather Patterns Over Great Lakes

Goddess of Salt and Energy Valley

There's so much more to explore beyond the ruby-red mountain, extending more than a kilometer to its pale caves and sharp-edged walls, covered with shimmering salt crystals.

These salts found at the Goddess of Salt mountain have been believed to possess a healing power, soaking up and releasing any negative and positive energy. "After having spent [time] in this valley, you are bound to feel much more invigorated, which is why the valley is also called the Energy Valley," says Farzad Kay, a tour guide.

In addition, the weathered rocks in the nearby Valley of the Statues, thanks to thousands of years of wind erosion, offers great view like an art gallery, to travelers.

However, the Ports and Maritime Organization of Iran says is not fully discovered by world travelers, with only around 18,000 visitors in 2019, despite its significant historical and natural attractions.

"If more attention is paid to the infrastructural development of Hormuz, this island can be changed to be an important attraction for tourists," said Ershad Shan, a local.

"We feel responsible for doing our bit for Hormuz. It's so rare and is a part of our identity," Shan said. "We feel an urgent need to contribute towards getting the world to take notice of this eco-heritage."