Waterspouts: What You Need to Know About the Shifting Weather Patterns Over Great Lakes

During late summer and fall months, the weather pattern could be particularly strange across the Great Lakes region, but not for their residents.

This shift in weather pattern can simply be defined as any tornado over a body of water, called waterspouts. While it's more complicated than that, it can basically be round down into its formation and life cycle.

Waterspouts are formed from a supercell thunderstorm commonly known as 'fair weather waterspouts', which literally occurs in a fair weather in nearly any month out of the year. However, for this phenomenon to occur, there has to be a 'concentrated season' - in which cold air sits over the warm lakes. 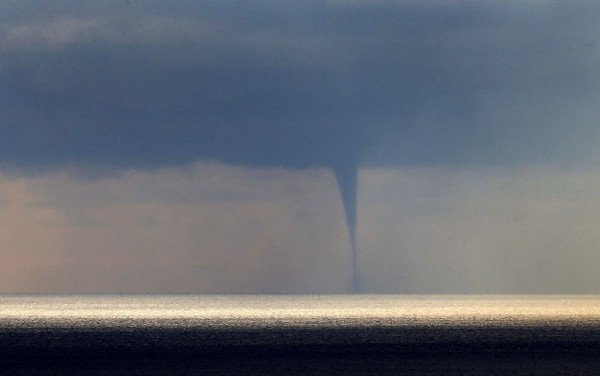 (Photo : Photo credit should read VALERY HACHE/AFP via Getty Images)
A waterspout forms on the horizon above the Mediterranean sea, off the coastal city of Nice on January 19, 2015.

These clouds called puffy cumulus clouds have to form first to produce waterspouts. It's basically making the conditions just above the surface of the water unstable, as cool air passes over the relatively warm lakes. As a result, the instability in place can lead to a vortex of swirling winds. If strong enough, it can suck up water from lakes like a condensation funnel, thus the waterspout.

The super cellular waterspouts on the other hand forms from the base of the cloud and extends downward. The result of this process is similar to that which occurred in the typical Tornado Alley in the Plains.

For waterspouts as a result of supercell thunderstorm to form, it needs a very specific set of atmospheric conditions. It is also common that these thunderstorms are capable of producing hail, strong wind gusts and frequent lightning.

The main atmospheric factors that are required to produce supercellular thunderstorms are shear to change wind direction and speed, 'lift' of warm air upwards, instability of atmospheric conditions, and moisture as last requirement for the formation of supercells and the eventual formation of tornadic activity over water or land.

Also read: The Possible Effects if a Nuclear War to Hit the Planet

Life risks during a waterspout

While waterspouts occur over bodies of water like lakes, it could have similar impacts with that of land-based tornadoes, and the risks of getting too close to it can be dangerous and life-threatening. For instance, a waterspout can tip over boats or small vessels.

If you are a passenger of that boat, you might want to know what to do in that scenario.

If caught in this adverse weather, it is important to first call or reach out to the National Oceanic and Atmospheric Administration weather radio broadcast to see if any special marine warnings are in effect. It's even better to first check if the forecast prior to heading out on the water has any potential weather-related hazards.

In cases where the first steps are no longer applicable and you're out on the water, observe and take note of the formation of a waterspout, and what direction it is moving into.

By generally analyzing its motion, you will know when to turn your boat around, perpendicular to the path and drive away. For example, if you notice that a storm from north of you travels to the east, turn south and get as far away as possible.