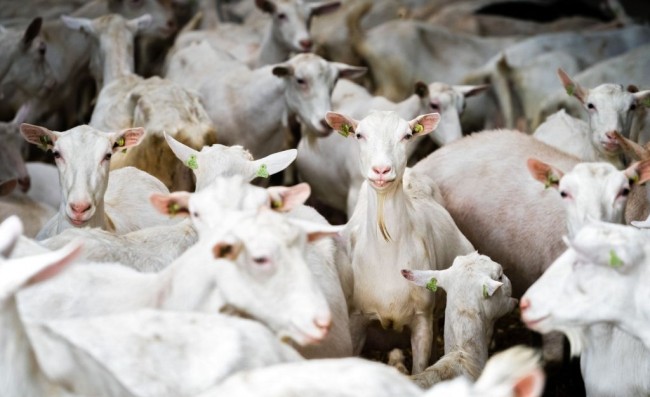 Goats are pictured at a goat dairy farm in the small village of Oirschot, on November 20, 2020.
(Photo : Photo by ROB ENGELAAR/ANP/AFP via Getty Images)

A farmer has been imprisoned after Wildlife conservation authorities detected and retrieved over 200 animals from horrible surroundings in Geoffrey Bennett's property.

The 68-year-old farmer abandoned two starving ponies experiencing parasitic illnesses and a sickly goat that fell in his cage. After officers seized Hurst Farm in Ripley, Surrey, in January 2019, a number of 22 sickly animals had to be executed by veterinarians due too much health problems.

While despite receiving immediate care after the rescue, additional 14 horses debilitated by parasites and illnesses died.

According to the RSPCA, 2 dogs, 1 goat, 1 chicken, and 1 duck also deceased afterwards.

As authorities discovered hundreds of worm-infested horses dwelling in areas with hazardous steel underneath and damaged barriers jutting from deep muck.

Within 2 stables are enclosures full of squished donkeys, goats, alpacas, and ponies sitting over months of garbage and feces.

As per RSPCA, many of the animals were emaciated and had severe medical conditions.

Significant numbers of dogs, including newborn were discovered confined and tethered in the "dirty" yard, whilst others are kept in "cramped little cages" and improvised shelters.

A record of 204 mammals were recovered at the Geoffrey Bennett's property, including 131 horses, 33 dogs, 2 sheep, a donkey, a goat, hens, geese, and birds.

Bennett Pled Guilty of His Crimes

While responders encountered vertebrae of skeletal components hidden in the dirt and covered in cloths, Bennett upon trial acknowledged his wrong doings and short comings to the animals under his care, pled accused to two Animal Welfare Act violations as well as six charges of neglecting to manage of animal by-products.

However due to Bennett's guilty plea, age, and healthcare complications were all taken into consideration by the court when punishing him.

Therefore, convicting him to 19 weeks in jail and barred him from having pets for lifetime at Guildford Crown Court after confessing to a series of cruelty to animals' charges.

Bennett will also be supervised for 12 months after his discharge from the prison, as per Judge Darren Reed.

"The prison service will exhibit you substantially larger duty and compassion than you have shown your pets," Recorder Reed remarked, sentencing him.

While Surrey Police PC Hollie Iribar described the case as "one of most challenging" she world has ever known.

"As a Surrey Police Rural and Wildlife Crime Officer, I had experienced horrific instances of animal abuse throughout the ages," she explained.

"This is among the most challenging problems I've encountered, and I'm thankful to the RSPCA and our other partnerships for all of their efforts in bringing this case to trial. "

"I am overjoyed that this tragic matter was resolved in trial so the wildlife affected were saved and given a decent opportunity to enjoy active lifestyles," Iribar expounded.

Kirsty Withnall of the RSPCA organized the search operation and lead the criminal probe. "RSPCA and World Horse Welfare officials had heard feedback regarding the ranch and had investigated the issues and obtained proofs," she added.

"It was a massive multi-agency relief effort that culminated weeks to prepare and intelligence collecting."

A maximum of 100 people from various organizations handled the case to assist gather up the animals.

Which took 12 hours per day to examine all animals, transport to veterinary vehicles and paramedics, and transport them away from the location, rendering it one of the largest organized rescue efforts the UK has seen since.