The experiment, released in Nature Metabolism, found that mice that ate once a day better metabolic activity. 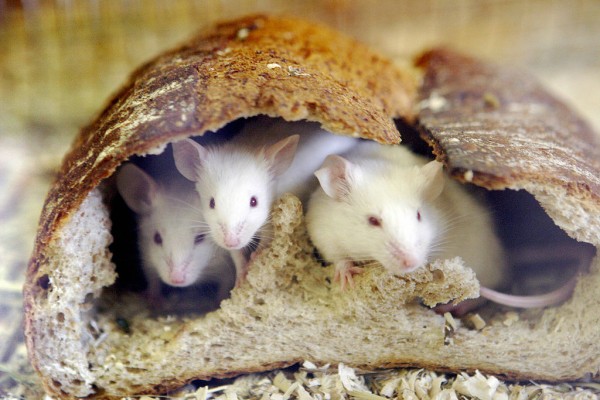 (Photo : Photo credit: YOSHIKAZU TSUNO/AFP via Getty Images)
Mice peer out from a loaf of bread which they hollow out and use the crust to live in, during an attraction for New Year visitors at the Inokashira Park Zoo in suburban Tokyo 06 January 2008, on the last day of Japan's largest holiday. This year is the Year of the Rat, according to the Chinese zodiac.

Per the report's primary investigator, Dudley Lamming of the University of Wisconsin, scientists have known for almost a generation that carbohydrate restriction enhances rat longevity.

Lamming's team proceeded to investigate if the time of meals played a factor and observed that it wasn't only the amount of meal that resonated.

2 additional subgroups had their calorie reduced by 30%, with one getting low-calorie meal all day and alternative consuming a 30% lesser portion of conventional meal in a one mealtime after a 21hours fast.

According to the findings, mice on a nutrition regimen with 21 hours without meal survived roughly a half-year better than rats which consumed as much as they pleased every day.

A final group of mice was conditioned to consume the same portion size as the reference sample but during a three-hour period following a long continuous fast.

Like the first batch, the last group who dieted with lowering calorie consumption exhibited so many healthcare advantages.

While mice on a reduced meal who ate through the day, showed zero significant beneﬁts including as enhanced blood glucose management, increased vigor in old age, or a longevity.

New Experiment Not Yet Suitable to Humans

However, Lamming notes that, although brief clinical experiments appear to indicate that confining dietary consumption to a 4 to 8 hours period a day "does have positive effects," the long-term implications are uncertain.

In response to the results, Stephen O'Rahilly, Chief of the MRC Metabolism Infections Institute at the University of Cambridge, stated that they might be difficult to extrapolate to mankind due to the vast disparities in the rates where the 2 species absorb nutrition.

"An equivalent humanity research should require individuals to consume all of the carbohydrates they require a week in a one day and then hunger for next six days," he explained.

"Because mice survive approximately 2 years and human beings currently survive around 80 years. Humans may need to carry out this study for further than 50 years to see if such a drastic shift in our dietary habits truly enhanced life span," he concluded.

Another potential implication for our species, according to Lamming, is that those who previously reduced their daily calories by 20% to 30% might want to contemplate reducing the time frame for consuming foods.

"Should our discoveries extend to humans," Lamming says, "they could be sacrificing a few of the perks of dietary changes by spacing out their food each day."