Following several aftershocks and outbursts from the volcano on La Palma Island this week, a "tsunami" of rapidly volcanic magma moved towards the Atlantic Coast.

The lava pouring from a conduit as it poured down the Cumbre Vieja ridge was recorded in breathtaking imagery.

On Friday, the Spanish island of La Palma was jolted by the second 4.5 massive earthquake in 48 hours, authorities said, as experts characterized a pouring stream of igneous magma from a bursting volcanic eruption as "a real lava tsunami."

According to Spain's National Geographical Institute, the two aftershocks were the most powerful to strike La Palma, a Canary Island off the coast of Africa, since the explosion occurred on 19th of September.

As per the La Palma administration, magma flowing toward Atlantic Coast prompted the relocation of over 300 residents Tuesday Afternoon, increasing the total population of individuals driven from their residences as of Tuesday to 1,200. According to the authorities, some 7,000 residents have been forced to leave ever since explosion.

On the territory of 85,000 islanders, law enforcement agencies have recorded zero injuries as a result of the earthquake. As of now, the majority of the island's GDP, which is built primarily on agriculture and hospitality, has remained untouched. 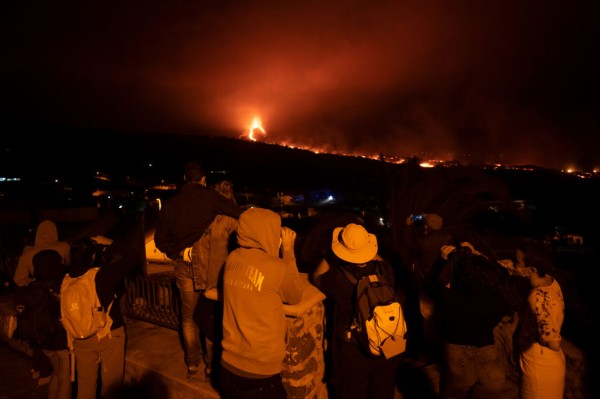 Upon the structural meltdown of the Cumbre Vieja volcano's peak on Saturday, a fresh torrent of lava has started flowing towards the coast, destroying banana and avocado fields as well as the majority of the village of Todoque's surviving dwellings.

The Canary Islands Volcanic Institute reported that in the 3 weeks that followed by eruption, rivers of basaltic material had wrecked 1,186 structures. On La Palma, which has an estimated population of 83,000 individuals, around 6,000 citizens have been forcibly displaced.

On Friday, two significant molten torrents were streaming from Cumbre Vieja peak. The first has decelerated to a halt, while the other is releasing a significant volume of igneous magma, forcing officials to remain on heightened guard for more rescue operations.

As the hot magma rushed along a slope, the Canary Islands Volcanology Institute compared one of its surges to a lava tsunami.

According to Vicente Soler of Spain's Higher Center for Scientific Research, the mount Vesuvius has vomited up sea material that precedes the island's creation 2 million years ago.

The EU aerial surveillance organization stated in one of their press conference that, "the eruption has destructed or later damaged around 1,500 structures, the majority of which are houses, and has spanned approximately 680 hectares (1,680 acres)"

"With over 300 individuals relocated on October 14, Thursday afternoon, increasing the cumulative figure of individuals displaced to about 7,000 ever since inaugural outburst on September 19," officials expounded.

There have been no recorded fatalities, but over 1,500 residences and structures have been damaged in previous days.