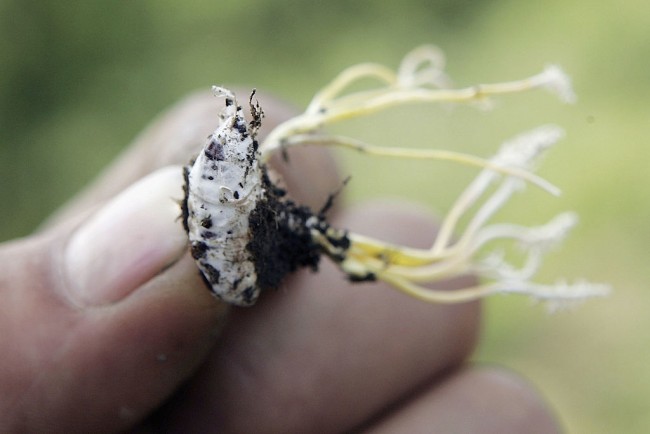 YONGCHUAN, CHINA - MAY 17: (CHINA OUT; PHOTOCOME OUT) A villager displays the Chinese caterpillar fungus he dug at a mountain on May 17, 2005 in Yongchuan of Chongqing Municipality, China. Chinese caterpillar fungus is also called Cordyceps Sinensis Mushroom. The plant multiplies specially by fungus parasiting into some insects larvae, forming hypha and maturing outside the larva. The fungus exists in mountains and meadows with an altitude of 3000 to 5000 meter. Caterpillar fungus is highly valued in Chinese medicine and used as crude drugs to restore energy, promote longevity and stimulate the immune system but because of excessive exploitation, the Chinese caterpillar fungus resource has been destroyed and becomes increasingly rare. The Chinese government has restricted the digging of the fungus.
(Photo : Photo by China Photos/Getty Images)

A breakthrough variety of cancer treatment synthesized out of a molecule found in a Himalayan fungus has now been discovered to be a counter treatment, and may eventually appear as a potential therapeutic option for people with cancer.

NUC-7738, which was developed by experts at the University of Oxford in collaboration with the UK-based pharmaceutical and biotechnology business organization NuCana, is now in the initial phases of development and is not yet accessible as an anti-cancer medication - but frequently reported investigational findings leave much room well for the potential drug.

The drug is said to have up to 40 times more efficacy of prior chemicals in killing cancer cells. In addition, when opposed to ordinary chemotherapeutic medicines, the substance is less dangerous to health.

Whilst in the early phases and hence not so far readily accessible as chemotherapeutic agents, the clinical trial findings suggest pledge of a therapeutic prospect.

Cordycepin (3'-deoxyadenosine), the primary component of NUC-7739, is a biologically arising chemical produced from the parasite fungus species Ophiocordyceps Sinensis.

The fungus, nicknamed the caterpillar fungus owing to its potential to devour and embalm moth larva, has been utilized in Chinese traditional medicine for millennia as an herbal treatment for cancer and other chronic illnesses.

Regrettably, because it degrades fast in the bloodstream, only a little quantity of cancer-destroying medication gets passed to the tumor.

NuCana, a biotechnology firm, has turned Cordycepin into a clinical treatment to increase its effectiveness as well as scientifically analyze its uses as a cancer medication, utilizing their innovative ProTide technology to generate a chemotherapeutic medicine with remarkably enhanced performance.

Also read: Experts Warn Ominous Threat of Flu Season to Happen this Year, But is US Ready?

Promising New Treatment for Cancer, on its Way

The treatment was created utilizing ProTide, a modern innovation designed by NuCana that aids in the effective delivery of chemotherapeutic medicines into cancerous tissues.

Numerous additional antiretroviral medicines, like Remsidivir and Sofusbuvir, have previously been created utilizing ProTide technology to cure illnesses including as Ebola, Hepatitis C, and Covid-19.

Cordycepin, commonly referred as 3'-deoxyadenosine (or 3'-dA), is a natively abundant nucleoside derivative that has been claimed to have anti-cancer, anti-oxidant, and anti-inflammatory properties, which actually explains why the fungus is frequently referred to as the world's finest parasite.

This even exhibits low cell absorption, implying that the molecule's real efficacy against cancer cells in the human body is significantly decreased.

NUC-7738 uses a variety of designed advantages to increase cordycepin's potential as an anti-cancer drug, including the capacity to penetrate cell lines interdependently of nucleoside carriers like Human Equilibrative Nucleoside Transporter 1. (hENT1).

As shown in the latest research on NUC-7738, these modifications increase the therapeutic candidate's anti-cancer capabilities by up to 40 times when examined against a variety of various tumor tissue lines.

Furthermore, preliminary results from NUC-7738's first in-human medical study look to be encouraging. The Phase 1 experiment, which started in 2019 and is currently in progress, has already included 28 patients with locally advanced cancers that have proven refractory to standard therapies.

As of now, participants have handled weekly escalating dosages of NUC-7738 adequately, with "empowering evidence of anticancer properties and sustained disease stability," according to the investigators' article.

Phase 2 of the experiment is now being planned, after the medication's efficacy has been properly proven and the appropriate protocol for Phase 2 participants has been defined.

The findings are reported in Clinical Cancer Research.