Lizards Give Birth to Their Young Like Mammal, Evolutionary Genes May be the Key

Scientists are studying lizards' evolution of birth, from laying of eggs to live births and they have succeeded in pinpointing the evolutionary genes from which the species is developing in order to 'build' a new way they reproduce.

The University of Glasgow led the study and it was published in Nature Ecology and Evolution. The study discovered that a remarkably close amount of the same genes involved in the lizards' pregnancy were distributed between other mammals and vertebrates that bear their young.

Developing from animals that lay eggs to animals that birth their young which is also referred to as viviparity is a huge evolutionary step. However, studying the genes that bring about such major changes is almost impossible and this is because when animals developed live-birth it was usually a long time ago

However, a species discovered in much of Eurasia and also Scotland so-called Common Lizard only developed to live-birth relatively not too long ago. Either a vertebrate lays eggs or is live-bearing, yet the genes that reveal being one or the other were unknown.

For the study, the scientists used several years to study the rare hybrid offspring reproduced from offspring production between laying of eggs and viviparous - live birthing - lizards.

Female reproduction of the animal was tracked in natural populations in faraway regions in the Alps and then the researchers made use of advanced genome analysis to discover how these lizards' DNA varies and the reason for this.

The analyses showed genetic profiles of live-bearing lizards have genes known to be connected with mammals' fertility and pregnancy. It also discovered that gene pathways of tissue growth and immune function employed in mammal reproduction were present in the lizards. Genes in egg-laying traits included some involved in birds' egg productivity.

Dr. Hans Recknagel, who headed the field and genome research when he was carrying out his Ph.D. and postdoctoral research, said: "This was fascinating research, not least because in this species of lizard egg-laying populations still occur and interbreed with live-bearing ones.

"Despite the 300 million years of evolutionary distance between reptiles and mammals, when we compared our findings across vertebrates-looking at seven independent origins of viviparity, or live birth, in mammals, squamates, and fish-we found that a significant amount of the same genes are involved in pregnancy in lizards and in mammals." 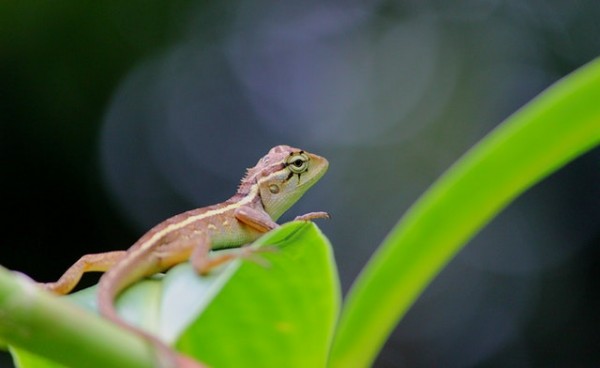 The senior author of the study, Professor Kathryn Elmer, from the University of Glasgow's Institute of Biodiversity, Animal Health and Comparative Medicine, said despite the fact that the origins of live birth (viviparity) are independent the genetic likeness is not expected to be a coincidence.

This reveals how evolution tends to discover almost the same answers to the challenges organisms are dealing with.

It can be making use of similar known genetic networks, as found here. But also new and dissimilar genes can be involved and will allow some flexibility in the manner evolution 'builds' a fresh reproductive mode repeatedly.