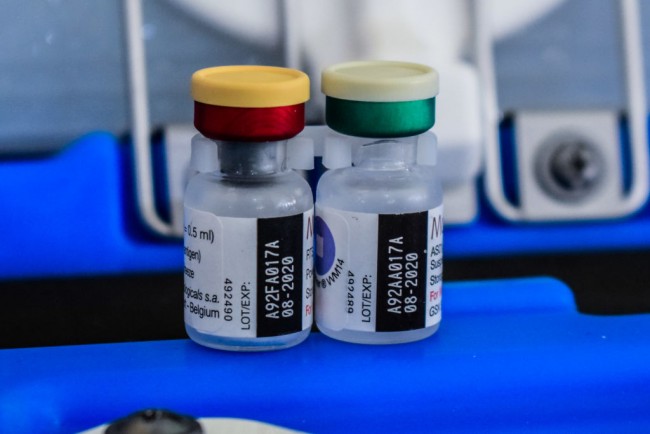 Picture taken on September 13, 2019 in Ndhiwa, Homabay County, western Kenya shows the new malaria vaccine. - The vaccine (Mosquirix) is the world's first malaria vaccine that has been shown to provide partial protection against malaria in young children and has been rolled out by World Health Organisation in Kenya, Ghana and Malawi.
(Photo : Photo by BRIAN ONGORO/AFP via Getty Images)

Sometimes deadly diseases are caused by parasites that spread because of mosquitos. Malaria makes people unwell, causing high fever, shivering chills, and flu-like symptoms. In the United States, about 2,000 cases of malaria are detected each year.

According to the World Health Organization, 229 million clinical cases of malaria were reported worldwide in 2019, with 409,000 individuals dying from the disease. Most of them were children in Africa.

Malaria is a major economic burden on many countries because it causes so much illness and death. Because many malaria-affected countries are already impoverished, the illness perpetuates a vicious cycle of disease and poverty.

The World Health Organization has proposed that the first malaria vaccine be widely distributed, a move that experts believe would save tens of thousands of children's lives each year throughout Africa.

Since the trial program started in 2019, more than 800,000 children in Ghana, Kenya, and Malawi have received the RTS, S vaccine, also known as Mosquirix, produced by the British pharmaceutical corporation GlaxoSmithKline (GSK).

Over the course of four years of testing, the vaccine prevented 39 percent of malaria infections and 29 percent of severe malaria cases among young African children.

In August, research headed by the London School of Hygiene & Tropical Medicine (LSHTM) discovered that giving both RTS,S and antimalarial medicines to young infants reduced hospitalization and death by 70%.

There have been concerns that decades of progress in eliminating malaria have stagnated, with substantial resurgences in some countries, such as Eritrea and Sudan, in recent years. The mosquito-borne parasitic illness claimed the lives of 409,000 individuals in 2019, most of them were in Africa. Over 270,000 children under the age of five were killed.

Experts hope, that the WHO's statement will re-ignite the race to find new vaccinations, which has been ongoing for than a century.

Scientists at Oxford University's Jenner Institute said earlier this year that a vaccine they created had demonstrated findings that would make it the first to achieve the WHO's 75 percent effectiveness objective. In a 12-month study of 450 youngsters in Burkina Faso, the vaccination demonstrated up to 77 percent effectiveness. Larger studies, including 4,800 youngsters in four countries, are already ongoing.

Also read: Covid Toes: Why Do Some Covid Survivors Get Painful Lesions in Toes and Fingers?

Malaria is spread by mosquito bites from infective female Anopheles mosquitos. Only Anopheles mosquitoes may spread malaria, and they must have been infected by a blood meal from an infected human before. When a mosquito bites an infected individual, a little quantity of blood is drawn, which includes malaria parasites that are minuscule. When the mosquito takes its next blood meal, about a week later, these parasites mix with the insect's saliva and are injected into the person who has been bitten.

They can spread by blood transfusions, organ transplants, or the shared use of blood-contaminated needles or syringes because the malaria parasite is in the red blood cells of an infected individual. Malaria can also be passed from a woman to her unborn child before or after birth (referred to as "congenital" malaria).

Malaria causes a fever and flu-like sickness, as well as shivering chills, headaches, muscular pains, and exhaustion. Nausea, vomiting, and diarrhea are all possible side effects. Because of the loss of red blood cells, malaria can induce anemia and jaundice (yellow skin and eyes). If the infection is not treated quickly, it can lead to renal failure, seizures, mental disorientation, coma, and death.