The United Nations are urging world leaders to take initiative in the coming global crisis at the COP26 summit, Tuesday. UN warns that over five billion people could struggle accessing water in 2050.

A report from the organization showed that 3.6 billion people have had inadequate access to water for at least one month per year since 2018. As the State of Climate Services 2021: Water report comes before the summit, WMO discusses the water-related hazards and their frequency for the past 20 years. 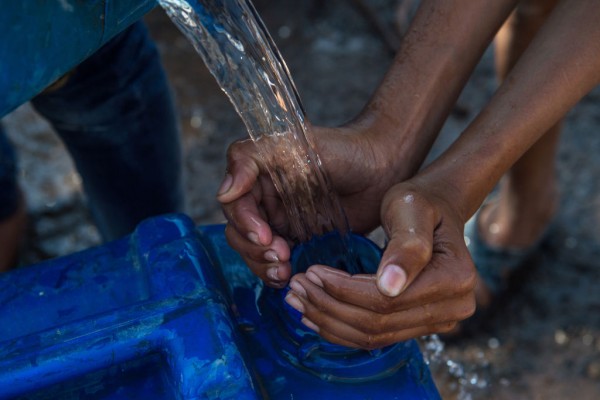 (Photo : Photo credit: ROBERTO SCHMIDT/AFP via Getty Images)
A resident of the eastern New Delhi neighborhood of Sanjay Camp cups his hands around the spout of a jerry can as another man pours in water at a water distribution point at the low income colony on February 23, 2016. A water crisis in India's capital will take up to two weeks to fix, authorities warned February 23, as taps ran dry.

Over the last 20 years, the levels of water resources had dropped at a rate of one centimeter per year. Antarctica and Greenland garner the biggest loss, however, several highly-populated lower latitude locations that are traditional water providers are also experiencing significant water losses.

WMO said that only 0.5 percent of fresh water on Earth is useable, challenging water security.

"Increasing temperatures are resulting in global and regional precipitation changes, leading to shifts in rainfall patterns and agricultural seasons, with a major impact on food security and human health and well-being," said Taalas.

Meanwhile, water-related hazards have also increased in frequency. Flood-related disasters have risen by 134 percent, and duration of droughts also increased by 29% since 2000.

"We have seven percent more humidity in the atmosphere because of the current warming and that's also contributing to the flooding," Taalas added in the press conference.

"This past year has seen a continuation of extreme, water-related events. Across Asia, extreme rainfall caused massive flooding in Japan, China, Indonesia, Nepal, Pakistan and India. Millions of people were displaced, and hundreds were killed. But it is not just in the developing world that flooding has led to major disruption. Catastrophic flooding in Europe led to hundreds of deaths and widespread damage," according to one of Taalas' statements.

"Lack of water continues to be a major cause of concern for many nations, especially in Africa. More than two billion people live in water-stressed countries and suffer lack of access to safe drinking water and sanitation," he added.

Taalas is urging countries to 'raise their game' in matching actions to their words on addressing this major risk to the welfare of mankind.

"We cannot wait for decades to start acting," he said.

"That's also a message for countries like China which has said that they would like to become carbon neutral by 2060 but they don't have a concrete plan for the coming decade."

It is top priority and objective of the COP26 summit to discuss matters concerning 'stepping up ambition levels' in climate mitigation and adaptation.