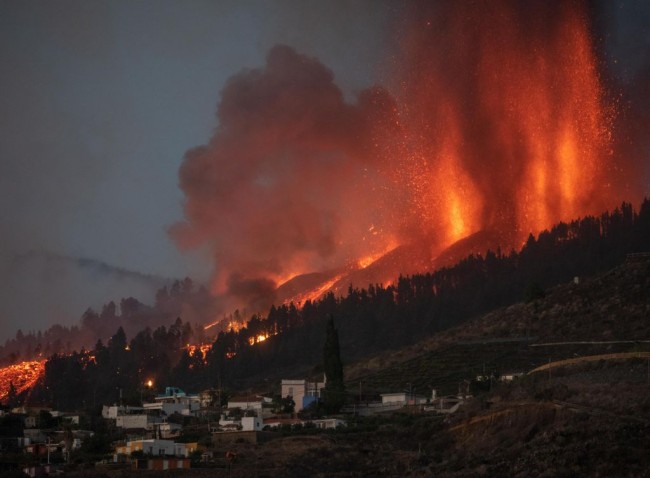 Mount Cumbre Vieja erupts in El Paso, spewing out columns of smoke, ash and lava as seen from Los Llanos de Aridane on the Canary island of La Palma on September 19, 2021. - The Cumbre Vieja volcano erupted on Spain's Canary Islands today spewing out lava, ash and a huge column of smoke after days of increased seismic activity, sparking evacuations of people living nearby, authorities said. Cumbre Vieja straddles a ridge in the south of La Palma island and has erupted twice in the 20th century, first in 1949 then again in 1971.
(Photo : Photo by DESIREE MARTIN/AFP via Getty Images)

An erupting volcano from the Spanish island of La Palma caused more earthquakes and lava flow after part of the crater collapsed, Monday.

The Cumbre Vieja volcano on the Canary Islands off northwest Africa had been producing fiery molten rock following the same route to the sea which calls out emergency evacuation for more people. Spain's National Geographical Institute said it recorded two quakes early Monday that measured more than 3.0 magnitude, two weeks after its explosion.

"It's not over yet, we don't even know how long there is to go," the Canary Islands' regional president Ángel Víctor Torres told public broadcaster RTVE. "We're in nature's hands."

Thanks to swift evacuations, the lava flow has not affected La Palma that much, a home to 85,000 people. However, it had caused significant damage to property, thousands of public infrastructure and farmland.

Biggest eruption on the island in more than 100 years

Earlier this morning, eruption and lava flow in La Plama continues without significant changes. There is ash arising a 2-3 km and slowly drifting southwest, as well as a new lava flow from the now breached crater.

According to the latest reported data, the lava had "covered more than 400 hectares of land, including 31 km of roads and destroyed more than 1000 buildings. The lava flows reach a maximum width of 1250 meters, and have a height of 8-50 meters. The slowly growing sea delta forms a peninsula about 40 hectares, and adds to the southwestern coastal western plains formed by recent volcanic eruptions."

With only little more than two weeks of activity, the recent eruption was already the biggest on the island after the two previous ones during the past 100 years, with an estimated volume of 80 million cubic meters last Friday, and now probably more in the range of 100-120 million m3. This surpasses both the eruptions of San Juan (1949, with 55 million m3 lava) and Teneguia (1971, 43 million m3 lava).

"We are facing a test of resistance, because we don't know when the volcano's eruption will end," Sánchez said in a press conference. "But citizens should know that when it does end, the government of Spain will be there to help with the enormous task of rebuilding La Palma and offer a horizon of prosperity."

While the Cumbre Vieja volcano has not yet showed any signs of slowing down, its eruptions have been continuously monitored.

La Palma government officials also monitored the air quality in the premises and increase in sulfur dioxide levels after the latest fissures opened. Fortunately, they confirmed that no present health threat to residents were posed. However, they advise residents to seal their doors and windows to block the toxic gas created when molten lava hits the ocean.