Four months ago, Nyiragongo's major volcanic eruption emitted lava that buried homes in a city of some 600,000 people, stopping short of the northern outskirts of Goma, and killing 32 people. It also generated powerful aftershocks, shaking the region every 10 to 15 minutes and rattling DR Congo city.

The reappearance of lava like dated September 18 was "a natural sign," according to Mahinda. "The appearance of this lake of fire in the crater will minimize earthquakes in the volcanic area of Goma."

In fact, the reappearance in the crater of the Nyiragongo volcano in eastern DR Congo is a good sign, according to experts.

"It is not a phenomenon that presents an imminent risk of a new eruption, but rather a phenomenon that allows the volcano to breathe," said scientific director Celestin Kasereka Mahinda of the Goma Volcanology Observatory on the 'Reappearance of the lava lake in Nyiragongo's crater'. 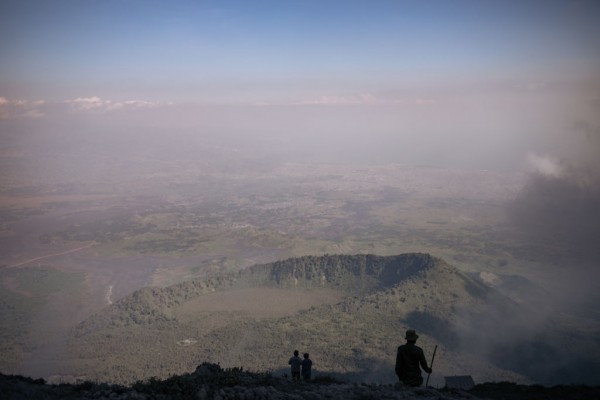 (Photo : Photo by ALEXIS HUGUET/AFP via Getty Images)
TOPSHOT - Congolese volcanologists and rangers from the Virunga National Park look down on the valley from the top of Nyiragongo volcano, north of Goma, the provincial capital of North Kivu, on June 11, 2021.

Scientists fear that the Nyiragongo eruption in late May and days subsequent to it might pose a potentially catastrophic event-a 'limnic eruption' under nearby Lake Kivu - also known as lake overturn.

Limnic eruption is a rare type of natural disaster that would send carbon dioxide gas erupted from deep lake waters, forming a gas cloud in the surface and suffocate wildlife, livestock, and humans in the vicinity.

Ministry of Communications of the Democratic Republic of Congo authorities ordered the evacuation of 400,000 people as a precaution. When seismic activity fell back, residents were safely returned in their homes.

The disappearance of lava lake from the crater sparked fears that it remained buried under Goma. Fortunately, the lake reappeared and "Nyiragongo found a way to breathe," Mahinda said.

"Fear would have persisted if the volcanic chimney remained blocked."

Also read: Due to Climate Change, Melting Ice at the Poles Cause Alarming Changes in Earth's Crust

Aside from the catastrophic phenomenon and risk of a limnic eruption, lava flows from Nyiragongo could combine with volcanic activity under the floor of the lake, "forming a fissural or phreato-magmatic eruption under the lake and/or a large earthquake of 6.5 or 7 magnitude," said the Goma Volcano Observatory (OVG).

In this case, "a limnic eruption would take place and dissolved gas in the lake's deep water would rise to the surface, especially CO2, asphyxiating all living beings around Lake Kivu on the Congolese and Rwandan side."

This could mean thousands of deaths, according to OVG, and should call out a need for resources to carry out an 'urgent exploration' of Lake Kivu.

When such phenomenon happens, use of rainwater for drinking or washing food should be avoided, given the ashfall from the volcano.

This year's eruption is the first major eruption of Mt. Nyiragongo since 2002, which had killed 245 people and destroyed 120,000 homes, covering most of the eastern part of Goma with lava, including half of the airport's landing strip. However, its deadliest record so far was in 1977, which resulted to deaths of 600 people.