The debate over the traditional Etruscans, a historical civilization whose ruins may still be found in Italy, has now been settled thanks to DNA evidence.

These intriguing individuals did not move from Anatolia (today half of Turkey) but shared genetic lineage with people who lived close by in old Rome, according to over 2,000 years of genetic data collected from 12 sites across Italy.

There is so much that we do not know about the Etruscans. Clearly, some evidence of their presence remains. We know they were excellent artisans, skilled metalworkers, and politically astute.

However, we only have a fragmentary understanding of their ancient language, which has made tracing their origins challenging, particularly in the absence of substantial genetic evidence. 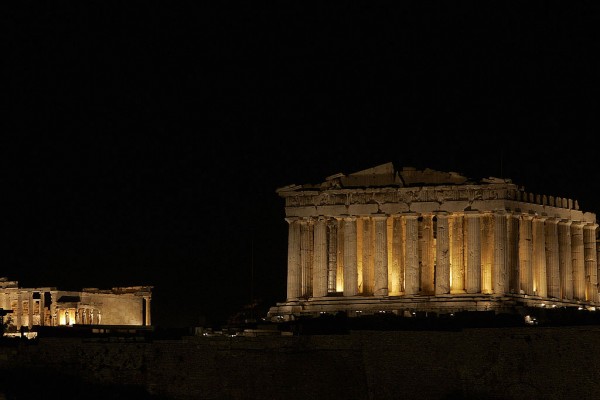 (Photo : Photo credit should read ARIS MESSINIS/AFP via Getty Images)
Athens, GREECE: The ancient temple of Parthenon is illuminated, 17 January 2006. Greece is conducting "sensitive discussions" to secure the return of two 2,500 year-old frieze fragments from the Acropolis held in Italy and Germany, with talks focusing on what items are offered in exchange.

The Etruscans moved into Italy from Anatolia or the Aegean, according to the Greek historians, and their culture was inherited from Greek roots. This view will not be popular among modern pupils' archeologists have found little or no evidence in support of migration.

Another hypothesis is that the Etruscan civilization sprang from indigenous people who had previously lived in the area, which is known as an autochthonous culture.

The Etruscan civilization developed from a pre-existing indigenous people in the area or what is known as an autochthonous culture. The Etruscans were a strong tribe with a unique language and traditions. They appeared around the 6th century BC in what is now central Italy.

Genomic evidence obtained from a dozen locations around the nation over the last 2,000 years indicated that the mystery civilization did not move from Anatolia (now part of Turkey), but it shared a genetic ancestry with people who lived in ancient Rome. The Etruscans were all derived from pastoralists who arrived in the region from the steppes in the late Neolithic and Bronze Age.

There are many unanswered questions about the Etruscans. However, some proof of their presence has survived to this day. They were amazing artisans with some understanding of metallurgy as well as being politically astute.

However, we only have a small understanding of their language, which became extinct some time ago, making determining their real roots much more difficult, especially given the scarcity of reliable genetic evidence.

A large international team of researchers, led by anthropologist Cosimo Posth of the University of Tübingen in Germany, attempted to solve the question by examining ancient DNA. They gathered genetic samples from 82 people in Etruria and southern Italy between 800 BCE and 1000 CE and compared them to DNA from other ancient and current groups.

Even though the two groups had major language and cultural distinctions, they discovered that the Etruscans had a genetic profile with surrounding populations, such as the Latins who lived in Rome at the same time.

The investigation also showed the outcomes of significant changes in Italy. The Etruscan population underwent a dramatic genetic change as the Roman Empire developed, according to ancient DNA, when individuals from the eastern Mediterranean interacted with the Italian population, because of the Roman immigration of slaves and soldiers.

Following the fall of the Roman Empire, northern European ancestry began to expand over the Italian peninsula, causing genetic profiles to change once more. That might have happened because of the Lombard invasion, which took over and governed much of Italy between 568 and 774 CE.