Over 36 Countries Assessed, Only One Country Found to have Climate Rating Compatibility

The Paris Agreement is a major turning point in the global climate change process because it is the first time that a legally binding agreement unites all nations together in a common cause to fight climate change and adapt to its consequences.

Many countries negotiated with the Paris Agreement, in which they agreed to make efforts to keep global average temperature rises far below 2 degrees Celsius (3.6 degrees Fahrenheit) this century, and eventually to 1.5 degrees Celsius (2.7 degrees F). Each signatory to the agreement provides its own national plan, which includes emission reduction objectives and strategies for achieving them.

Apart from one African country, over 35 nations, including the world's top carbon polluters, are falling short of their climate change promises, according to new research. 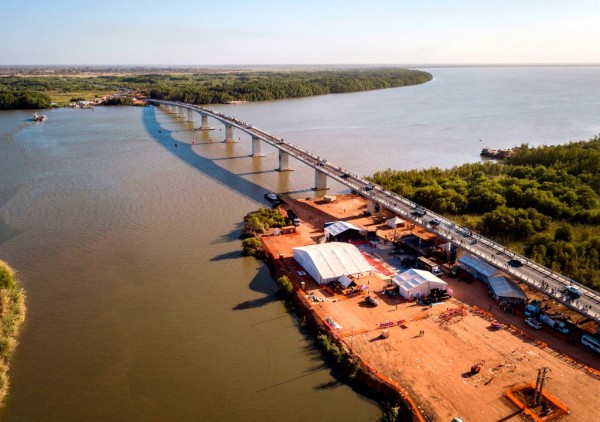 (Photo : Photo credit: EMILIE IOB/AFP via Getty Images)
This picture shows an aerial view of people crossing the Farafenni Bridge after its inauguration by Senegal's president and Gambia's President on January 21, 2019, in Farafenni. - The bridge was built to facilitate trade between Northern and Southern Senegal.

Gambia, a small West African country that was awarded an overall climate grade consistent with balancing global warming (around 1.5 degrees Celsius as per the Paris Agreement), out of 36 nations examined including the EU.

Gambia is a small country in the Western African country. One of its main paths to reduction, with the use of renewables, as seen by a program that would expand the country's energy capacity by one-fifth, in part through the building of one of West Africa's largest solar facilities. A huge effort to restore 10,000 hectares of forests, mangroves, and savannas has also been undertaken by the government. To limit the misuse of forest resources, it is also converting flooded farmlands with dry upland rice fields and boosting the usage of efficient cook stoves.

Climate rating compatibility is the advancement that reduces the damage caused by climate change while maximizing the potential for human development and, more resilient future offers. Climate change and its responses are causing complex changes in innovation, trade, manufacturing, population distribution, and risk. This is transforming the development landscape for policymakers, who must foster and maintain economic and social development in the face of various threats and uncertainties while also reducing or maintaining emissions.

The report gave countries a grade based on a variety of factors, including domestic climate policies, action, and land use, international financial support, and climate goals, as well as whether those targets represent a "fair share" of carbon reduction or include global aviation and shipments.

Countries like Costa Rica, Kenya, Morocco, Ethiopia, Nepal, Nigeria, and the United Kingdom are not far behind, the rating "almost sufficient," indicating that they might return to 1.5 °C "with moderate improvements."

The Europe, Germany, and the United States have launched new measures to update their climate objectives, but their total climate activity is not enough and remains "insufficient."

The alarming findings ring in the aftermath of record heatwaves, terrifying floods, and devastating wildfires that have ravaged Europe and North America in recent months and may continue to rage in many areas.