This week, a great white shark weighing 11-foot, 7-inch was pulled from waters off Nova Scotia with a very big fresh wound noticed on its body. This means it had the injury recently.

A global nonprofit organization, Ocearch, released a picture of the grisly wound on Facebook, the photo shows the injury extended from the belly to the back of the female shark weighing 1,264-pound.

A big part of flesh was missing close to the top of the bite and five cuts which could possibly be from the teeth of an animal were close to the bottom.

What would maul an alpha predator nearly 12-foot long? On Wednesday, Ocearch wrote another larger white shark could have done this.

Ocearch wrote: "This interaction was possibly an example of dominance behavior. It is not uncommon for sharks to show their dominance over a smaller animal of their species by delivering a significant but non-fatal bite."

The researchers gave the shark the name Maple, making reference to one of the national emblems in Canada.

Experts say white sharks can develop to as long as 20 feet, implying that the shark that attacked the victim could have been larger by far. The bite looks very fresh, indicating it was also close by.

As part of an Ocearch expedition lasting for four weeks, a "sub-adult," Maple, was captured and tagged off West Ironbound Island in Nova Scotia. The researchers are hoping to gather information from about two dozen sharks, and all will be freed back into the North Atlantic without being unharmed.

People are convinced white sharks spend their summer and fall in Canadian waters, and this makes it the main area for shark study along the East Coast, the agency reports.

McClatchy News reports that Ocearch has tagged white sharks of about 17 feet off Nova Scotia during previous expeditions.

Information about the fresh wound was received a number of days after the Atlantic Shark Institute uploaded a picture of a female white shark that got an equally remarkable fresh injury. For this attack, the photo showed the aggressor took out a chunk of pectoral fin. 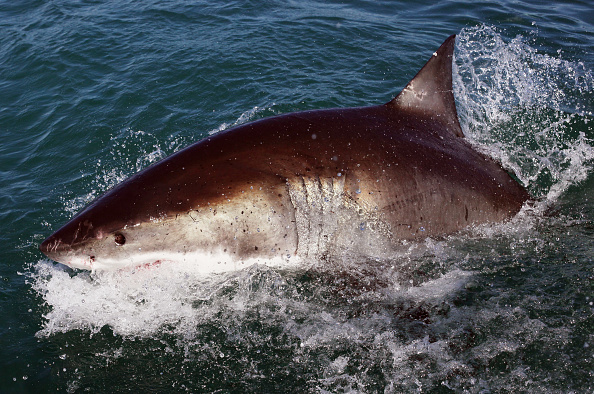 Bites seen on white sharks are usually attributed to a brutal type of mating in which males are seen "grabbing the females with their teeth," Ocearch says.

But the females retaliate the bite in some cases as a way of disagreeing with male overtures, experts say. White shark wounds usually heal rapidly, and this makes the bites an insignificant inconvenience.

Ocearch wrote: "Our veterinarian on board assessed the wound (on Maple) and decided that it would be best to let it heal on its own!".

The post that has the photo of her wound has gotten around 1,600 reactions and comments in the previous day. Some commenters even wondered if the shark had been mauled many times.