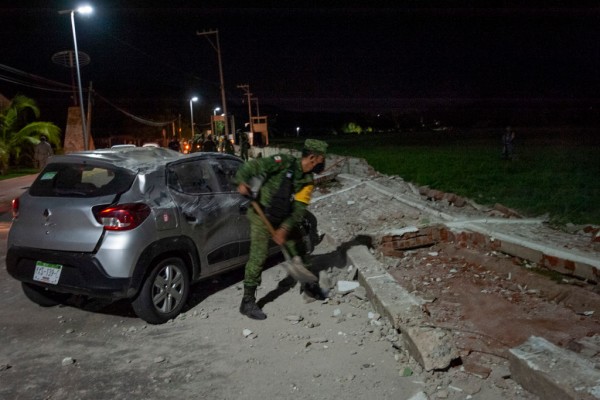 Mexicans are posting stunning footage of flashes of blue light flashing through the skies after a powerful earthquake struck Acapulco on the country's Pacific coast on Wednesday.

The 7.0 magnitude quake struck 11 miles northeast of the resort city of Guerrero in the state's southern region. Although at least one person was killed, buildings were damaged, and rockslides strewn across a major roadway, the quake did not inflict extensive damage. It did, however, frightened many.


The earthquake lasted about a minute and was felt 200 miles distant in Mexico City. As buildings shook, walkways undulated, and blue lights flashed spectacularly in the sky, residents ran into the streets.

Users quickly began using the hashtag #Apocalipsis, Spanish for the apocalypse, the biblical phrase for the end of the world.

Troy Shinbrot, a physicist at Rutgers University, believes the blue lights aren't an indication that the world is ending.

"If it did," Shinbrot explained, "the apocalypse would have happened a thousand years ago when this was first found." However, in an interview with NPR, he stated that "seismic lights" have been documented throughout history and occur regularly.

Some scientists think that the luminosity, or eruption of light, is generated by friction between rocks near the Earth's crust, releasing energy into the atmosphere. Then, near the planet's surface, a flare of light is created.

Shinbrot claims to have detected voltage fluctuations comparable to what happens when the Earth's crust slides during an earthquake in his laboratory.

He advises anyone interested in science to take a roll of sticky tape into a dark closet and peel down a strip fast. Then, according to Shinbrot, a light glow will be released. However, he warns against drawing too many parallels between "earthquake lights," or EQL, and the sticky tape experiment because scientists still don't know much.

"Geophysicists vary on the extent to which they believe that individual reports of anomalous illumination near the time and epicenter of an earthquake truly represent EQL," the USGS said on its website.

He claims that most of what was seen in Mexico's skies on Tuesday night after the earthquake were power flashes caused by swinging electrical grid cables colliding with other lines, trees, or buildings.

"It would have been impossible to identify whether observable natural electrical phenomena were going on alongside the brilliant power flashes from the electrical grid," Elliott adds.

Victor Manuel Cruz Atienza, a seismologist at Mexico's National Autonomous University, believes the phenomenon exists but claims that yesterday night's sky was filled with much electrical activity due to a downpour.

"We can't be positive the earthquake caused the light display we saw last night," he told NPR. "Especially considering the downpour, we were having." He said it was difficult for him to see the difference in numerous films circulating on social media.

Both Cruz Atienza and Shinbrot believe that there will be more opportunities to observe the blue flashes in Mexico's skies. And, as many Mexicans have pointed out, it will most likely happen in September. This is because many of Mexico's most powerful earthquakes have occurred over this period, including an 8.2 magnitude quake that rocked the state of Oaxaca four years ago on Sept. 7, 2017, and Mexico City's catastrophic 8.0 earthquake on Sept. 19, 1985.