Adult musk ducks reared in captivity can replicate sounds they heard as hatchlings. Sounds like a door slamming, a guy sneezing or even a catchphrase like "You bloody fool!" from a caretaker could be one of them.

Rumors in Australia about a Talking Duck 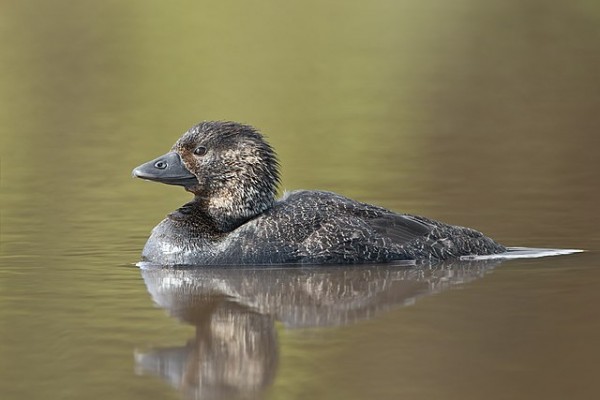 Grey Australian waterbirds learn high-pitched whistles from their old flock mates. Individuals bred in captivity apart from other musk dusks have been observed mimicking the noises connected with human existence.

According to Carel ten Cate of Leiden University in the Netherlands, the findings shows that musk ducks (Biziura lobata) have joined parrots, certain birds, whales, seals, bats, elephants, and humans as vocal language learners meaning they acquire "utterances" based on what they hear as babies.

Animals that can communicate are sociable creatures, and the majority of those who possess this ability do so while in captivity. Because they have been removed from their own species, they engage with people, notice their verbal signals, and eventually learn to talk for themselves. They have no idea what they are saying.

Ten Cate specializes in avian vocal learning and was lately intrigued by a rumor of a talking duck in Australia. So, he sought out Peter J. Fullagar, an Australian scientist who originally discovered the phenomena more than 30 years ago and is now retired.

Fullagar also sent Ten Cate an audio clip of a young male that was reared on the same area as his mother in 2000, together with Pacific black ducks (Anas superciliosa)  quack "like common park ducks." Female musk ducks do not make vocal signals, thus the young, nameless duck learned to imitate the quacking black ducks in his environment.

Ten Cate utilized software to prove that the birds were replicating sounds from their surroundings, some of which they had just heard in their initial weeks of existence, after ten Cate validated the recordings' validity. The ducks produced similar noises dozens of times in a couple of minutes, at around 4-second intervals, in the recordings.

"When I first heard these stories I thought, 'Oh this must be a really good joke',"

"But actually, they come from respected scientists and birdkeepers, and the reports are very reliable. Apparently, these ducks are learning something about vocalizations starting at a very young age." ten Cate says.

Ten Cate identified a case of two other parroting, captive musk ducks reared in the UK after speaking with other experts. He describes them as sounding like a snorting pony, a coughing caretaker, and a creaking door. Despite these compelling tales, few examples have been reported, because wild ducks are typically too violent to be maintained in captivity, according to ten Cate.

There are more talking animals, mimicking the sound of a human voice.

The capacity of orca, or killer whales, to replicate the intricacies of human communication was demonstrated in a study released last month. The paper was co-authored by Josep Call, a professor of evolutionary origins of mind at the University of St Andrews. "I think we have first evidence that killer whales may be acquiring sounds using vocal imitation," he added.

Dr. Adriano Lameira of Durham University led a team of researchers in 2016 that demonstrated that orangutans can modulate their vocal range and communicate in a manner comparable to humans. The study focused on Rocky, an ape from the Indianapolis Zoo who copied the words of his keepers in exchange for food.

Angela Stoeger-Horwath of the University of Vienna caught film of Koshik, a male elephant from Korea, talking in a very human manner in 2012. Koshik would insert his trunk into his mouth to establish a vocal tract that allowed him to communicate pitches and formants comparable to those seen in human speech.

Dr. Irene Pepperberg, an animal psychologist at Harvard University, studied Alex, an African grey parrot, for 30 years. Prior to the study, scientists commonly thought that because birds did not have a primate brain, they would be incapable of completing sophisticated mental activities. Although Dr. Pepperberg stated that Alex was not necessarily able to utilize language, she demonstrated that he was capable of two-way conversation and expression with people.