Thousands of people scrambled to flee South Lake Tahoe as the whole tourist resort city was ordered to evacuate, where wildfires raged near Lake Tahoe, the enormous freshwater lake that spans California and Nevada.

As it burns southeast of Lake Tahoe, nearing the major ski resort town of South Lake Tahoe, the Caldor Fire has burnt more than 207,931 acres (About the area of Austin, Texas) and is just 23% controlled. According to officials, it is now the 15th-largest fire in California history, having destroyed or damaged at least 780 buildings, including 600 houses. More than 32,000 buildings are still in jeopardy.

With 35 to 40 mph wind gusts expected until Wednesday night, those on the front lines are fighting an uphill struggle. 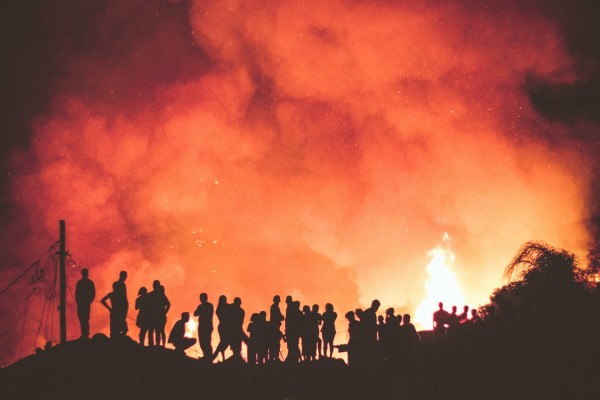 California and Nevada have issued red flag warnings, and President Joe Biden proclaimed a state of emergency in California on Wednesday. Due to the emergency conditions caused by the Caldor Fire, Biden authorized federal assistance to augment state, tribal, and local response operations, according to the White House. He also gave the Department of Homeland Security and the Federal Emergency Management Agency (FEMA) authority to coordinate all disaster relief operations and provide resources to mitigate the emergency's effects.

There are now 20 fires raging in California, resulting in the destruction of about 1.88 million acres (about the area of Puerto Rico) and 2,700 buildings.

The Dixie Fire, which started on July 13 and is now the second largest and 14th most damaging fire in California history, is still burning in Lassen County, Northern California. The fire has consumed 844,081 acres (about half the area of Delaware), the size of Rhode Island, and is just 52 percent controlled.

The Monument Fire, the state's 20th biggest, has burnt 174,706 acres (about twice the area of Athens, Georgia) and is just 29% controlled in Trinity County, California.

According to Cal Fire, more than 15,000 firefighters have been assigned to the front lines of the wildfire, and over 59,000 people have been evacuated across California.

The French Fire, which burned for over 40 square miles (104 square kilometers) in the southern Sierra Nevada, has been contained to 26 percent. Forest houses on the west side of Lake Isabella, a popular leisure area northeast of Bakersfield, were safeguarded by crews.

The US Department of Defense is deploying 200 Army soldiers from Washington state to assist firefighters in Northern California, according to a statement released on Saturday by the US Army North. Eight C-130 aircraft from the Air National Guard and Air Force Reserve, each capable of dumping thousands of gallons of fire retardant, have also been dispatched to combat wildfires in the West.

This year's wildfire season in California is outpacing last year's record season, with 400,000 acres burnt throughout the state compared to the same period last year.

Also read: Here's What Triggered Hurricane Ida to Intensify into a Monster Hurricane