Founder of Kabul shelter Paul "Pen" Farthing had flown safely out of Afghanistan, bringing along with him over 140 dogs and 60 cats, but leaving his charity's staff behind in Kabul.

The former Royal Marine landed at London's Heathrow Airport on a privately funded chartered plane, Sunday, without his staff from the Nowzad charity shelter, as well as their dependents.

The 'Operation Ark' was Farthing's mission to evacuate from the country along with rescued animals amid desperate struggle to get UK nationals and local allies out of the country. Farthing was among the ones eligible for evacuation in Britain's military airlift, supposedly along with Afghan members of his staff and their families, but he prioritized the animals instead. 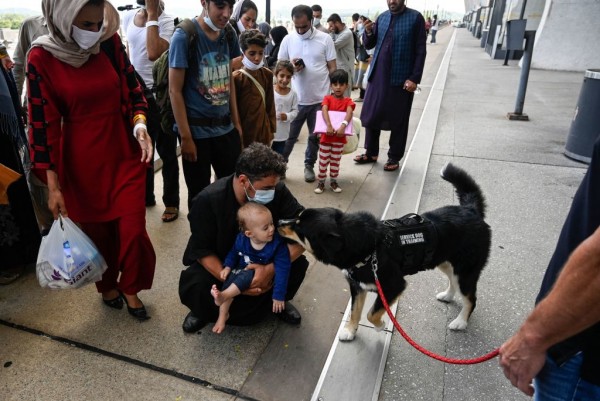 (Photo : ANDREW CABALLERO-REYNOLDS/AFP via Getty Images)
A young refugee from Afghanistan looks at a service dog as his family waits to board a bus after arriving and being processed at Dulles International Airport in Dulles, Virginia on August 23, 2021.

The Ministry of Defence (MoD) said Pen Farthing and his rescued animals were assisted through the system at Kabul airport by the UK armed forces, and are currently being supported while he awaits transportation.

"On the direction of the defence secretary, clearance for their charter flight has been sponsored by the UK government," MoD added.

Despite the huge public support received by Farthing's animal shelter campaign in Kabul, it garnered criticism from government officials after he left.

"What would you say if I sent an ambulance to save my dog rather than to save your mother?" said Conservative lawmaker Tom Tugendhat, who served with the British Army in Afghanistan.

Farthing and his supporters said the "Operation Ark did not take airplane seats from people or drain resources from the official evacuation operation." However, defence secretary, Ben Wallace, expressed his complaints about Farthing's supporters' "bullying, falsehoods, and threatening behavior", saying that this distracts the focus which is evacuating the most vulnerable.

"I think it has taken up too much time of my senior commanders dealing with this issue when they should be focused on dealing with the humanitarian crisis," Wallace said. "I had to listen sometimes to calls of abuse to my advisers, to my officials, based mainly on falsehoods, that somebody, somewhere had blocked a flight. No one blocked a flight."

"Fundamentally, as we have seen on the media, there are desperate, desperate people, and I was not prepared to push those people out of the way for that."

"Went through hell to get there and we were turned away into the chaos of those devastating explosions," Farthing tweeted.

He said that their team got caught up in a terror attack inside the perimeter of Kabul airport, killing 169 Afghans and 13 U.S. troops. It was only until Friday that they reached to safety and given clearance for the chartered flight, wherein they were assisted by British troops.

Animal welfare campaigner Dominic Dyer and acting U.K.-based spokesman for Farthing said Farthing was "a national hero" who faces "a smear campaign" by government officials. He said that Pen Farthing risked his life in Kabul to get his people and animals to Britain.

MoD refuses to comment further stating that Farthing did not use military flights, so it was a matter for the Foreign Office.