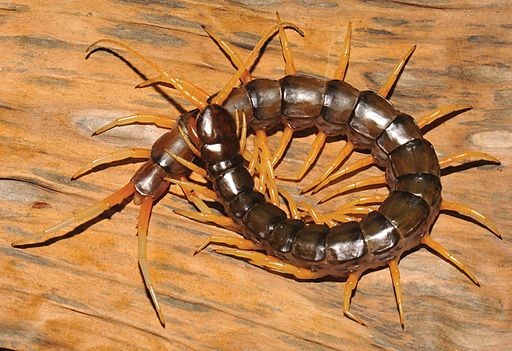 A recent study has discovered that giant carnivorous centipedes on a South Pacific Island can kill and consume up to 3,700 seabird babies per year.

Phillip Island centipedes (Cormocephalus Coynei) are vicious creatures with defensive plates along their segments and poison that they inject into unwary prey using pincer-like "forcipules."

It was the horrific diet of these leggy creatures that piqued experts' curiosity. According to recent research, centipedes are the uncontested apex predators on Phillip Island, situated 870 miles (1,400 kilometers) east of Australia, and are a key element of its ecology by killing and eating thousands of young black-winged petrels (Pterodroma Nigripennis) each year.

The giant centipedes emerge from their lairs as darkness falls across the lonely island, stalking their prey. They find their way over the forest floor, which serves as their hunting area, using two sensitive antennas. Because black-winged petrels dig tunnels in the ground, their young are easy prey.

As the baby birds sleep, the giant centipedes attack, ripping skin from the back of the birds' necks, injecting them with fatal poison, and eating them alive as the paralysis sets in.

Researchers estimated that giant centipedes swallow 2,109 to 3,724 petrel baby birds each year, based on observations of them hunting and analysis of tissue samples collected from their maws and the remains of their prey.

The researchers tracked and observed the giant centipedes as they searched at night for 132 hours. After entering their recordings into a model to estimate the centipedes' diet, the researchers discovered that vertebrate creatures accounted for 48 percent of the apex predators' diet, with around 8% coming from baby birds alone.

If you come face to face with a giant centipede inside your house, it might be a warning that others are lurking around. Without adequate protection, we do not suggest handling one. Though the venom of the gigantic centipede isn't harmful to humans, its squeeze is believed to be excruciating.

The giant centipedes' insatiable appetite is extra ordinary, but these skin crawling vertebrates are beneficial to the island's ecosystem, transferring nutrients from the water (where the petrels search for food) onto land, making centipedes critical to the island's recovery of vegetation.

The pigs and goats were removed in the early twentieth century, while conservation efforts by the adjacent Norfolk Island National Park eliminated the last rabbits in the 1980s. Prior to the advent of the black-winged petrel, ancient bone deposits in the soil show that Phillip Island was home to a significant number of other tiny burrow-nesting seabird species allowing the seabird and centipede populations to recover.

Also read: Rattlesnakes Can Deceive You Into Thinking They're Closer With This 'Sound Trick'