San Antonio River in Texas has been home to several aquatic plants, animals, and microbes and a major waterway about 4 miles north of downtown. A common ecological problem the river faces recently are the apple snails, non-native species that competes with the locals for food source and highly destroys their habitat.

Giant applesnails (Pomacea maculata) are native to South America and voracious eaters of aquatic plants throughout Texas. In fact, they are on the Texas Parks and Wildlife (TPWD) Invasive, Prohibited, and Exotic Species list. 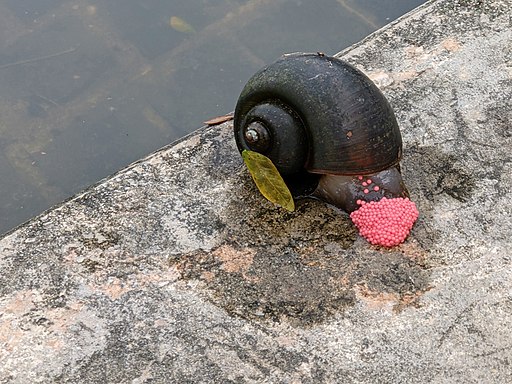 The invasive apples snails were first spotted in October 2019 along the Museum Reach section of the river, according to River Authority biologists. They've also been spotted around the same time in the King William area of the San Antonio River.

"There were about 3,600 egg cases last year, (and) we are already up to over 7,600 egg cases this year," said Shaun Donovan, Environmental Science Manager for the San Antonio River Authority (SARA).

"The amount of adult snails is three or four times more than they were in 2020. So, it's pretty bad, and it's just consistently getting worse from over the last couple of years."

The River Authority typically addresses this problem by draining the river to remove the snails and its eggs, which appears bright pink and holds thousands of eggs. Last January 2020, River Authority crews were able to remove nearly 100 adult apple snails and over 1,000 egg cases, with the approval of the City of San Antonio.

"If we can get the egg cases out, it means that there's not a stand of young individuals that are going to replace the older ones," Donovan said. "The older ones (will) die out. So, it's critically important for us to take the egg cases off as soon as we see them so that we're not allowing for successful reproduction of the apple snails in the river."

Apple snails are typically sold in pet shops and assumed to have been dumped in the river when they outgrow their aquariums. The River Authority suggests locals to help Environmental Sciences Team to further study and remove the presence of this non-native species along creeks and rivers.

Also read: Mollusk Dubbed as 'Wandering Meatloaf' Has Teeth Made of Rare Iron!

Apple Snails are detrimental to the water ecosystem

"If they start going downstream away from the channelized areas of the River Walk and into the natural parts of the river, apple snails can eat the vegetation on the banks and they can cut back that vegetation so much that we could start having erosion along the banks," Donovan said.

Since nothing eats them, these invasive species can freely reproduce and take over territory and resources that rightfully belong to native species, and eat their way through native vegetation, destroying riverbanks with their burrowing behavior. They can also potentially carry a parasite.

Donovan said the problem requires solution from the entire community. "It's always great for people to come out and utilize the natural resources that we have and be responsible."