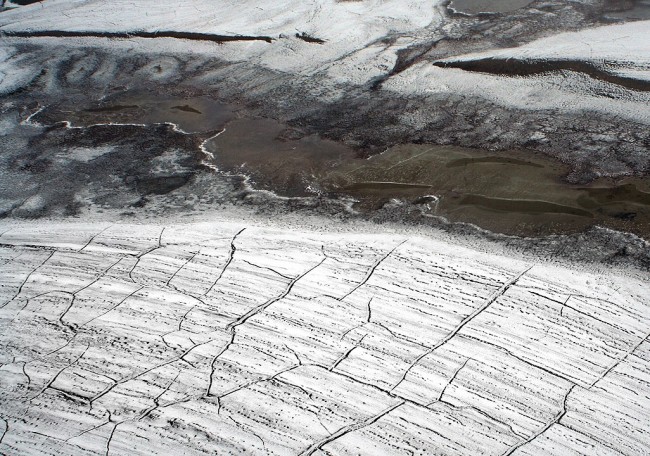 As the permafrost in the Russian Arctic continues to melt, more and more ancient lives are discovered, buried deep beneath the frozen layer of the Earth's surface.

Some of the finds recorded by the Sky News are the "parts of mammoth tusk, as well as fragments of woolly rhinoceros' bone", which once roamed the Arctic grasslands before it became extinct: rhinos were around 14,000 to 15,000 years old and mammoths about 10,500 years old.

The bone and tusk fragments were located in Duvanny Yar, near Chersky in the Siberian Arctic, home to international research stations where studies of ice loss and its impacts are held. A well-preserved carcass of a woolly rhino which was believed to have been frozen for tens of thousands of years was also discovered last year in Eastern Siberia.

Meanwhile, the thawing permafrost in the Abyisky region of Yakutia in north-eastern Russia also discloses frozen plant life from the Pleistocene epoch - a period of about 2.6 million to 11,700 years ago.

However, these significant discoveries of natural history come at a huge price.

The thawing in Russia's permafrost also brings a huge environmental problem for the globe. As climate change continues to melt ice in the permafrost, large amounts of pent-up methane gas are being released into the atmosphere, causing the ice to thaw even faster. This means shorter winters and longer warm summers, increasing numbers of wildfires and severe heat waves.

Just this summer, Northeastern Siberia had had larger than usual burns amid record-setting heat, and peat fires has been releasing tens of thousands of years storage of carbons, harming the planet significantly. An estimate of 1.7 billion tons of carbon is released every year due to melting permafrost, between October through April, twice as high as previous estimates.

'Grazing animals' can help slow down the loss of permafrost soils

The carbon-rich soil in the northern hemisphere which covers 24 per cent of land, currently holds more carbon than has ever been released by humans. Slowing down the loss of permafrost soils from human-induced climate change helps contain and absorb carbons more, which is essential for the planet's sake.

According to scientists from the Universität Hamburg on a March 2020 study, animals including herds of horses, bison and reindeer can help slow down the loss "by disrupting the insulative layer of snow which sits on top of the peat in the winter."

With the animals' grazing nature and stamping hooves, snow cover above the frozen layer remains scattered and compressed, reducing the insulating effect and "intensifying the freezing of the permafrost."

Moreover, the Universität Hamburg scientists said that the simple and natural technique could save and preserve around 80 percent of all permafrost soils around the world until the year 2100.