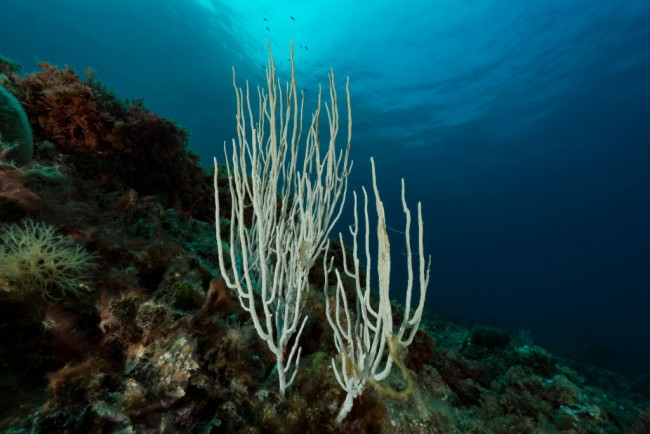 MARSEILLE - MEDITERRANEAN - FRANCE- AUGUST 29 : A white gorgonian (Eunicella singularis) starting to be covered with filamentous algae, on August 29, 2017 in Marseille, France. The Mediterranean represents a hotspot of marine biodiversity. With only 1% of the world's oceans and seas, it is home to nearly 10% of the world's marine species. There are also hundreds of endemic species.
(Photo : Photo by Alexis Rosenfeld/Getty Images)

Biologists from Penn State University had 'resurrected' what was believed to have been a forgotten genus of the late 1800s.

These 'yellow cells' observed deep in the tissues of certain temperate marine animals including sea anemones, corals, and jellyfish are considered genetically distinct among other marine creatures, encouraging curiosity for scientists to find out whether these cells are part or separate organisms of the animal, or whether it is parasitic or symbiotic to the host.

Originally, the 'yellow cells' were classified by scientist Karl Brandt under the genus Zooxanthella way back 1881. Brandt coined the term zooxanthellae which is still a colloquial term currently used by biologists until now.

Another occurrence of these yellow cells was examined by Scotsman Patrick Geddes in which analysis had confirmed that the cells were separate organisms and beneficial in both individuals. He then established the category of the cell as Philozoon which means 'to love as a friend' and 'animal' in Greek. Since Brandt's study came first, the term Philozoon genus was never used, which eventually became forgotten when Geddes decided to switch his work to urban planning.

Moreover, works of Geddes and Brandt 140 years ago suggest that these cells are photosynthetic animals under the family Symbiodiniaceae. In simple terms, these 'yellow cells' are symbiotic, single-celled algae found in corals and other marine life, living in partnership with all multicellular organisms.

"By emending and reviving the Philozoon genus, we are honoring the work of this natural historian," said lead author of a new study and professor of biology, Todd LaJeunesse of Penn State.

With reference to the two old species from 1800s, researchers from Penn State University took a deeper look into the 'yellow cells' using genetic and geographical data, as well as their morphological and ecological traits to better identify their position in the genetic tree, and later on found that these cells belong to six new other species.

LaJeunesse and his colleagues also found that the Philozoon can be found in shallow, temperate marine habitats globally, including the Mediterranean Sea, eastern Australia, New Zealand, and Chile, which suggests that their symbioses are widespread on Earth.

According to LaJeunesse, they were able to collect all the sample during the global pandemic, with the help of other colleagues from seven countries, including one from Italy where Geddes originally conducted his research.

Findings show that life indeed finds a way to persist and proliferate as the new species have been living in a broad range of environmental conditions.

"This study highlights how the spirit of scientific discovery brings people together, even in times of hardship."

Also read: Bull Sharks Are Capable of Forming Friendship With Each Other, Study Suggests