Bull Sharks Are Capable of Forming Friendship With Each Other, Study Suggests

Bull sharks receive their name from their short, blunt snout and brawny demeanor. They have broad, sturdy bodies and large pectoral fins, and they are medium-sized sharks.

They frequently attack people unintentionally or out of curiosity in the murky waters of estuaries and bays. Bull Sharks are found all throughout the world in coastal waters. They may be found in the United States off the East Coast and in the Gulf of Mexico. 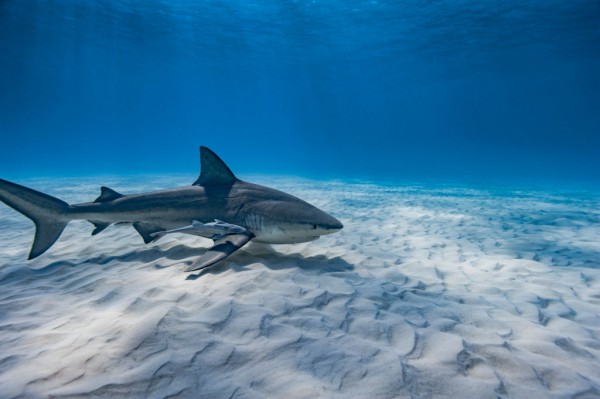 (Photo : Photo by Alexis Rosenfeld/Getty Images)
BAHAMAS, CARIBBEAN SEA - DECEMBER 2007: A bull shark (Carcharhinus leucas) swimming on a sandy bottom on December 21, 2007 in the Bahamas, Caribbean Sea. Carcharhinus leucas belongs to the group of the five most dangerous sharks in the world, it is often implicated in attacks on humans.

Bull sharks, unlike other sharks, can survive in freshwater for extended periods of time. Bull sharks are heavily hunted for their flesh, skins, and oils, and their numbers are believed to be decreasing.

They may grow to be 3.5 meters long, weigh more than 200 kilograms, and are an apex predator. Even apex predators, though, want companionship. According to current study, bull sharks may be able to produce them.

Home of the Apex Predators

Shark Reef Marine Reserve (SRMR) in Fiji is home to eight shark species as well as hundreds of fish species. Bull sharks, huge and curious animals that may grow to be up to 3.5 meters long, are one of the primary attractions, and it has the world's largest population of bull sharks.

Researchers used social structure analysis skills and applied them to Fiji's bull sharks for a new study. The data was gathered, however, on "baited" dives, in which diving firms put feed into the ocean to attract sharks to the dive location.

Also read: Are Rare Sharks Being Killed for the Coronavirus Vaccine?

Fiji's bull sharks have been studied for the first time in more than a decade. The study was conducted by Dr Thibaut Bouveroux, a post-doctoral researcher from the Dauphin Island Sea Lab in the who usually investigates how marine mammals create social bonds.

For this study, he used his social structure analysis skills and applied them to Fiji's bull shark sharks.

Bull sharks have been found to form "friendships" with other bull sharks, but the researchers don't know if they are actually friends. Researchers say it's not clear whether the sharks turn up together because they "like" each other or just happen to live nearby. "Some bull shark individuals seem to prefer long-term companions and avoid others "Dr. Juerg Brunnschweiler, a Swiss independent shark researcher who developed the study, agreed.

According to a recent Fijian research, bull sharks form companionships, with some sharks preferring specific individuals and shunning others.

Researchers examined data from over 3,000 shark dives in Fiji's Shark Reef Marine Reserve (SRMR) The dives lasted 13 years and recorded the behavior of 91 individual bull sharks that could be identified by external characteristics such as scars and malformed or missing fins.

The researchers discovered that certain bull sharks appear to choose long-term mates and shun others.

As per a new study, sharks in the South Atlantic Ocean may be developing friendships with one another. Dr. Brunnschweiler of the University of Wisconsin-Madison conducted the study. He claims that speaking about friendships here would be anthropomorphic, because friendship is a connection of reciprocal affection between people, not animals.