Computer simulations from a NASA-funded study suggests that supermassive black holes may generate tsunamis in space from escaping gas.

Astrophysicists have found tsunami-like structures, just like earthquakes and underwater volcanic eruptions may displace enough ocean water to create a tsunami. These 'swirling walls of gas' have barely escape the intense gravitational pull of the supermassive black hole, hosting very giant tsunami-like structures in the universe. 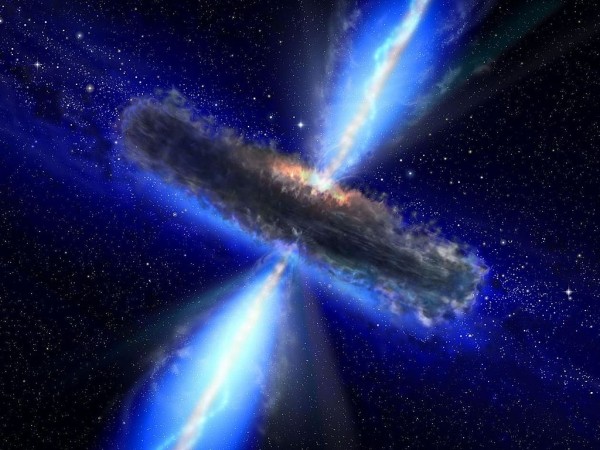 (Photo : Photo by NASA/ESAvia Getty Images)
IN SPACE: In this handout from NASA/ESA, an artist's concept illustrates a quasar, or feeding black hole. NASA's Wide-field Infrared Survey Explorer (WISE) revealed millions of potential black holes in its survey of the sky in 2011.

Astrophysicist Daniel Proga from University of Las Vegas, Nevada (UNLV) explained that the laws governing the phenomena surrounding the black hole is quite similar to the laws of physics here on Earth. By designing a computer simulation, researchers aim to examine and better understand the interaction of gases and radiation around supermassive black holes.

Astrophysicists find black holes as naturally mysterious, and how odd they distort their environment within dozens of light years. Sometimes, black holes larger than a million suns create large disks of gas and matter swirling around them and feed off materials from a system called an 'active galactic nucleus'. Theses active galactic nuclei shoot out jets of materials, emitting X-rays so intensely bright that over a million of these objects have been listed by astronomers.

This X-ray radiation indicates how dense or gaseous certain regions called the 'clouds' are around supermassive black holes. These 'clouds' are 10 times hotter than the surface of the sun, scorching hundreds of thousands to tens of millions of degrees, and moves as fast as the solar wind.

"They are rather exotic objects that you would not want an airplane to fly through," lead author and postdoctoral researcher Tim Waters from UNLV said. The author is also a guest scientist at Los Alamos National Laboratory in New Mexico.

Data from the study suggests that as the disk's atmosphere spins around the black hole, it forms waves of gas and matter along with the outflow winds pushed out by the X-ray radiation. These waves can then grow into massive gas tsunamis that can stretch up to 10 light-years above the disk.

According to researchers, these tsunami-like structures start to lose the influence of the black hole's gravity once formed.

Also read: The Earth's Heat Has Doubled over the Past 14 Years, NASA Warned

Dynamics within the Disk's Atmosphere

Results of the study surprisingly refuted the existing theory that clouds around an active galactic nucleus are formed spontaneously out of hot gas and magnetic fields are required to propel cooler gas from a disk into the wind. According to Waters, thermal instability cannot produce cold gas directly but it can be an alternative for magnetic fields by lifting cold gas into the wind.

Heated plasma from the X-ray light within the atmosphere of the accretion disk expands and disrupts these cooler gases.

In the meantime, no satellite data can currently confirm the new findings, according to the team, but they hope to reinforce their findings with future research using telescopic observations and observations of plasma near active galactic nuclei from NASA's Chandra X-ray Observatory, including the European Space Agency's Advanced Telescope for High-ENergy Astrophysics (ATHENA) project.

Also read: Meteorite Minerals Found in the Shores of The Dead Sea