Meteorite Minerals Found in the Shores of The Dead Sea

A terrestrial mineral only previously discovered in extraterrestrial meteorites was mysteriously found near the shores of the Dead Sea.

The mineral Allabogdanite, named after a Russian geologist Alla Bogdanova, was the only known natural high-pressure phase reported in the Fe-Ni-P system, previously described from a single meteorite, Onello iron. 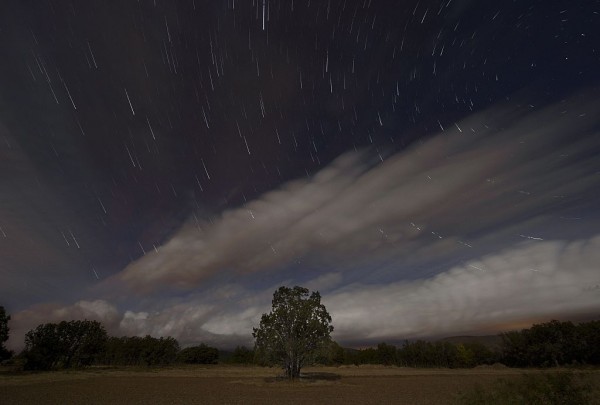 (Photo : Photo credit should read DANI POZO/AFP via Getty Images)
A multiple exposure picture taken in the early hours of August 12, 2014 shows a Perseids meteor shower in the night sky from the mountains of the Sierra Norte de Madrid near the municipality of Valle del Lozoya. AFP PHOTO / DANI POZO

What was believed to be first-of-its kind and a rare find was more common than expected when the mineral was thereafter found in one of the largest and well-studied meteorites in Santa Catharina, and other allabogdanite occurrence in Barbianello and Onello meteorites.

The sudden appearance of the meteorite mineral is located in the Negev Desert of Israel, southwest of the Dead Sea and its possible Earthy origin is still being speculated up to this day.

An Evidence of Extraterrestrial Event

Authors of the new paper published in American Mineralogist reported in the study the discovery of the high-pressure polymorph of (Fe,Ni)2P, allabogdanite in the 'surficial pyrometamorphic rocks' of the Hatrurim Formation known as the Mottled Zone, not far from the Dead Sea basin in Israel. Lead author and crystallographer Sergey Britvin from St Petersburg University in Russia and his team described the discovery as a 'first terrestrial occurrence' the allabogdanite mineral only ever found in iron meteorites.

Typically, the allabogdanite mineral is formed at an extremely high pressure over 25 gigapascals, pressure compared to that of large meteorite collisions.

"Such high pressures on Earth can be attained during catastrophic collisions with large meteorite impactors, or at the Earth's mantle conditions, at a depth of more than 500 kilometers," Britvin explained.

While it is not certain that the said allabogdanite came from space, it can be a result of a specific extraterrestrial event. However, the mineral formation cannot be associated with Britvin's statement as no evidence of large meteorite collisions were recorded in the region. In addition, analysis of samples from the rocks in the Mottled Zone suggests that no deep connection or any kind was made by these rocks with the Earth's mantle, which makes the study inconclusive.

The real origin of the terrestrial mineral is hardly proven at this time, but the team of researchers hope to rely on other sources of the rare mineral to be found somewhere in the Earth's surface. The authors can only currently assume that the terrestrial allabogdanite was formed via transformation from barringerite and 'posit potential scenarios' of its formation.

As stated by the researchers, the discovery will remain a 'mineralogical enigma' if more diverse data cannot be collected. "The origin of terrestrial allabogdanite in the rocks of the Mottled Zone remains unresolved and adds to the number of mineralogical enigmas of this unusual metamorphic complex," they noted.

Meanwhile, their current findings will serve as a foundation in understanding the allabogdanite's phase transitions and natural composition, by carefully deriving data from subsequent experiments.

Also read: The Earth's Heat Has Doubled over the Past 14 Years, NASA Warned