Infestation of Invasive Caterpillar: The Largest Outbreak in Southern Ontario and Québec

During the previous few weeks, a hungry moth larva has been devouring tree leaves throughout southern Ontario and Québec, as well as from Michigan to Vermont.

The Lymantria dispar also known as gypsy moth or in some sources, it is also referred to as the "LDD moth." They're all members of the same species that has caused huge outbreaks that have lasted for years since the 1980s.

The caterpillar has destroyed over 17,000 square kilometers of Canadian trees. Both Canada and the United States have spent billions of dollars to combat the virus. The outbreak can be linked back to a failed commercial endeavor, in this example, an attempt to establish a North American silk industry more than a century ago.

Although it is now restricted to a few provinces and states in Canada and the United States, the invasive caterpillar may spread further as a result of global warming. 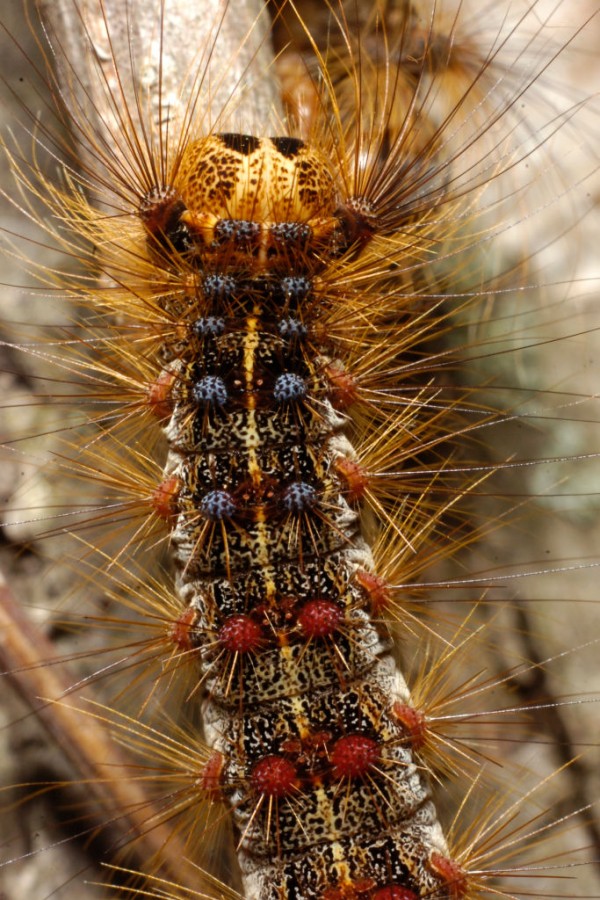 (Photo : Photo By Ben Hasty/MediaNews Group/Reading Eagle via Getty Images)
A detail shot of a gypsy moth larva on the side of a tree.Gypsy moths stripped leaves off of the trees on one side of Adamstown road in Adamstown. This photo was taken Wed afternoon near 520 Adamstown Road .

L. dispar is a caterpillar that may eat a square metre of leaves each day. Since the 1980s, three L. dispar outbreaks have occurred in Ontario, impacting over 350,000 hectares of forest. The largest, which occurred in the 1990s, impacted about 350,00 hectares and lasted until 2020. To eradicate the pests some towns spray trees with a biological pesticide called BtK, which particularly targets caterpillars.

Another method is to tie a ring of burlap around the tree's trunk to capture the caterpillar as it moves up and down. L. dispar is an invasive species that may trigger insect pandemics, resulting in the death of vast numbers of caterpillars.

Also read: Monarch Caterpillars Fight Each Other for Scarce Milkweed

A Failed Business Endeavor that Resulted to Large Outbreak

A French artist, astronomer and entomologist Étienne Léopold Trouvelot began breeding native North American moths on trees near his home in order to establish a silkworm colony. He failed because his caterpillars developed viral infections when housed in big numbers.

By 1879, Medford locals were complaining about enormous numbers of strange caterpillars infesting their trees, One neighbor wrote: "The caterpillars were over everything in our yard and stripped all our fruit trees, taking the apple trees first and then the pears. There was a beautiful maple on the street in front of the next house, and all its leaves were eaten by the caterpillars. They got from the ground upon the house and blackened the front of it. ... The caterpillars would get into the house in spite of every precaution, and we would even find them upon the clothing hanging in the closets."

Since Trouvelot's L. dispar got away from him, the early attempts to manage L. dispar were labor demanding, with workers dispatched into the trees to remove the insects. However, this did not stop the growth of the infestation, and L. parasites continued to move westward over the following few years, finally making their way into southern Québec and Ontario in the 1960s.

When will the Invasive Caterpillar Outbreak End?

L. dispar outbreaks often last three to five years and resolve on their own. As carbon dioxide levels rise and temperatures rise, it may be spread throughout much of the country by 2050. By not transporting firewood from one location to another, people can help prevent the introduction and spread of new species.