Flesh-Eating Parasites on the Rise in United States; Climate Change May be Blamed 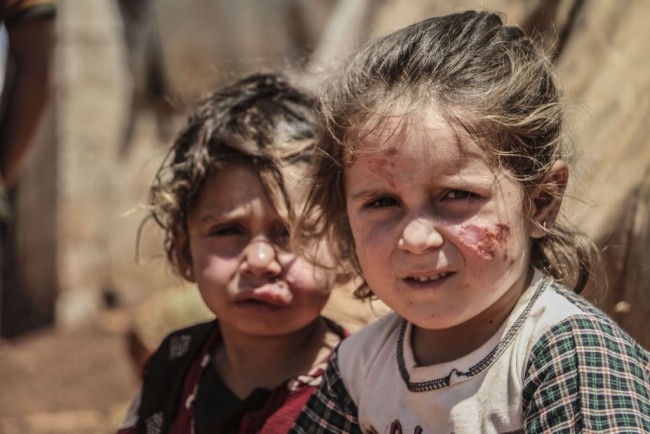 IDLIB, SYRIA - JULY 02: Syrian children suffering from leishmaniasis, a parasitic disease spread by the bite of phlebotomine sandflies, are seen in a refugee camp in Idlib, Syria on July 02, 2020. In the refugee camps in Idlib, danger of leishmaniasis disease arose due to inadequate living conditions and insufficient health services. In the camps where sheltered civilians escaping from the attacks of Assad regime and its supporters, infrastructure problems, especially exposed septic pits and damaged sewers, cause the spread of the disease.
(Photo : Photo by Muhammed Abdullah/Anadolu Agency via Getty Images)

A parasitic disease can potentially infect more people in the US due to climate crisis, creating a rather favourable habitat for the pest-borne tropical disease brought by flesh-eating leishmania parasites.

Leishmaniasis parasites are classified as a neglected tropical disease (NTD) that can be found in parts of the tropics and colder parts of southern Europe, now spreading across US states including Texas and Oklahoma where the parasites have become endemic. People in countries such as Brazil, Mexico and India are also affected by the disease, and can potentially reach far north of Canada in a matter of time.

These flesh-eating tropical parasites are commonly characterized by crater-like ulcers with thick, yellowish pus coat and one of the 'predominantly infectious' species of parasite in the US.

Leishmaniasis disease can take several forms in people. For instance, some people experiences milder symptoms from the parasite Leishmania Mexicana that can heal on its own. Some acquire the 'silent infection' or individuals with asymptomatic leishmaniasis where people who got infected shows no signs or symptoms. On the other hand, there are certain infections that can be life-threatening such as the visceral leishmaniasis - also known as kala-azar in India, characterized by fever, anaemia, weight loss, and enlargement of spleen and liver. The kala-azar was so fatal that it did not spare 95 per cent of its cases.

The most common form, the ones where sores from sand fly bites typically develop in the skin within a few weeks or so is the cutaneous leishmaniasis. The lesser common forms are the Mucosal leishmaniasis where parasites attack mucous membranes of the nose (most common), mouth, or throat.

Statistically, about 1.5 to 2 million people are infected with leishmaniasis in a year globally, with only 70,000 death rate.

An Emerging Health Threat in the US

According to experts, the main catalyst in the widespread of the tropical disease are climate change and susceptible host. Aside from that, scientist John Curtin from US Walter Reed National Military Medical Centre noted several other factors that lead to increasing frequency of leishmaniasis in the US.

"Climate change, the identification of competent vectors and reservoirs, a highly mobile populace, significant population groups with proven exposure history, HIV, and widespread use of immunosuppressive medications and organ transplant all create the potential for increased frequency of leishmaniasis in the US," he explained.

In addition to that, a recent study published in the journal Microorganisms said that deployment of troops from the US to tropical countries like Iraq and Afghanistan can potentially impose an emerging health threat in the country.

Figures from a 2010 study participated by some scientists from University of Texas at Austin predicted that the species of rodents, flies and the parasites in the US will reach Oklahoma, Kansas, Arkansas and Missouri by 2020, and the number of leishmaniasis infections in humans can double by 2080.

The continuous change in climate, stimulating conducive environment for rodents and sand flies, suggests that the flesh-eating parasites expanding as far as southern Canada is not an impossible phenomenon.