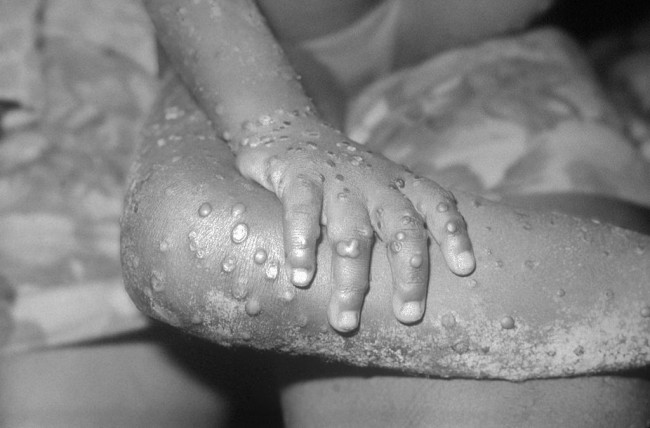 BONDUA, LIBERIA - UNDATED: In this 1971 Center For Disease Control handout photo, monkeypox-like lesions are shown on the arm and leg of a female child in Bondua, Liberia. The Centers for Disease Control and Prevention said June 7 the viral disease monkeypox, thought to be spread by prairie dogs, has been detected in the Americas for the first time with about 20 cases reported in Wisconsin, Illinois, and Indiana.
(Photo : Photo Courtesy of the CDC/Getty Images)

The World Health Organization (WHO) recently reported two cases of monkeypox, a rare disease caused by infection with monkeypox virus, in the United Kingdom and Northern Ireland. Reports say the two identified infected people came from the same household.

The first outbreak occurred in the Democratic Republic of Congo. There had been intensified efforts to eliminate the virus at the time, but it had spread in other central and western African countries.

As mentioned previously, the disease was typically a rare case. The only human monkeypox infections documented outside of Africa was in United States in 2003 with 47 cases, and in 2018, 1 case was reported in Israel, and 3 cases in United Kingdom.

In the present time, there have been only six cases of monkeypox reported in the UK so far, including the two new recorded cases. Public health officials said the two cases were acquired overseas.

The symptoms for monkeypox disease can be mild or severe, but are usually self-limited, and can be resolved spontaneously within 2-4 weeks. It can become more severe among children which can complicate from secondary infections, bronchopneumonia, sepsis, encephalitis, to infection of the cornea, eventually leading to sight loss.

Cases of the disease represents a risk of animals-to-human or human-to-human transmissions, from direct contact with the blood, bodily fluids, or cutaneous or mucosal lesions of infected animals. In Africa, it was documented that virus infection had been found in many animals. One risk factor of being infected is by eating their partially cooked meat or other animal products.

While person-to-person transmission is relatively limited, with the longest recorded series of transmission in a community being six successive infections, it can sometimes lead to severe illness in some individuals.

According to WHO, no specific treatment is currently recommended for monkeypox. Although a vaccine for it was approved in 2019, these vaccines are not widely accessible. Aside from that, several observational studies of smallpox vaccination are only about 85% effective.

"There is likely to be little immunity to the infection in those exposed as endemic disease is geographically limited to West and Central Africa," said WHO.

The most possible remedy at this point is to spread awareness and educate the public about the preventive measures they can take to lessen exposure from the virus. Feasibility and appropriateness of using vaccinia vaccine are currently being assessed and developed, including antiviral agents.

Unlike smallpox, monkeypox is less easily transmitted. However, unvaccinated populations outside West and Central Africa are more susceptible to monkeypox virus infection. The WHO global health sector continues to observe and prepare for possible outbreak and develops outbreak response activities for monkeypox in affected countries.