According to news reports, water levels in Lake Mead, the essential reservoir formed by the Hoover Dam, got to a new record low this week as the Western U.S. keeps suffering from a severe drought.

The Largest Reservoir in the United States

Reuters reported in the past 21 years the reservoir has fallen 43 m (140 feet) - overall. Engineers created Lake Mead in the 1930s by constructing the Hoover Dam in the Colorado River at the border between Arizona and Nevada

It is the largest reservoir in the United States, holding some 34 trillion liters ( 9 trillion gallons) of water, which gets distributed to approximately 25 million people inhabiting the Southwest, including those in Phoenix, San Diego, Tucson, Los Angeles, and Las Vegas, Reuters reported.

For the past two decades, the Southwestern U.S. has been in a nearly persistent drought, with snowfall and rainfall too low to let the region to completely recover from the drought, according to CNN.

Also Read: Lake Mead Shrinks to its Lowest Level In History, What's Next?

"Climate change is obviously playing a role," in the continuous drought, a meteorologist for CNN, Brandon Miller, told the news outlet. Miller said: "The warmer temperatures are driving that dangerous cycle [of drought] and making it difficult for average or even above-average rainfall years to make a dent, when one or two below-average snowfall/ rainfall years takes place, as we have just seen, the outcome are disastrous."

CNN reported the low levels in Lake Mead will possibly need states that rely on the reservoir to carry out water-saving measures. U.S. officials will decide in August whether to declare a "Level 1 Shortage Condition" for Lake Mead for 2022, which would prompt cuts in water supply for the region.

For instance, Arizona may have its water supply cut by 320,000 acre-feet, which would be around one year's supply for 1 million people, according to Retuers. 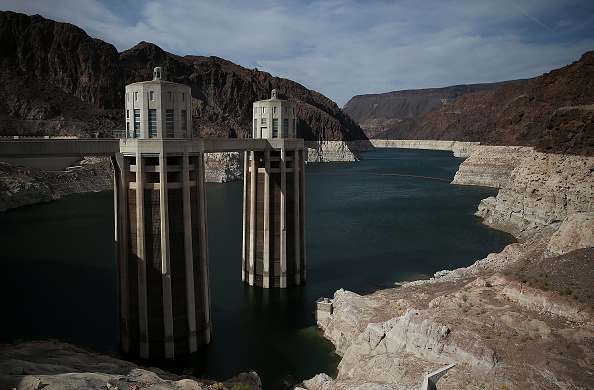 Director of the Arizona Department of Water Resources, Tom Buschatzke, told CNN: "While we may have little water coming to Arizona from the Colorado River in 2022, water managers and suppliers in Arizona have been taking measures to prepare and will keep working to make sure the river stays stable for generations to come."

Hoover Dam was constructed between 1931 and 1936 during the Great Depression and on September 30, 1935 it was dedicated by President Franklin D. Roosevelt. Initially referred to as Boulder Dam from 1933, in 1947 it was formally renamed Hoover Dam for President Herbert Hoover by a joint resolution of Congress.