It is widely believed that the quality of healthcare is higher in developed countries, and that results in a longer average lifespan for their citizens. In contrast, developing countries with weaker healthcare systems and infrastructure have higher mortality rates.

However, there are instances where the urban, sedentary lifestyle may not always be as advantageous as those of some people living in the most rural parts of the world.

At least, that was the conclusion of a recent health study into the Tsimane Tribe of the Bolivian Amazon. The results indicated that, despite limited access to modern healthcare and lower standards of living, members of the tribe exhibited brains that were not as aged as their Western counterparts in developed nations. 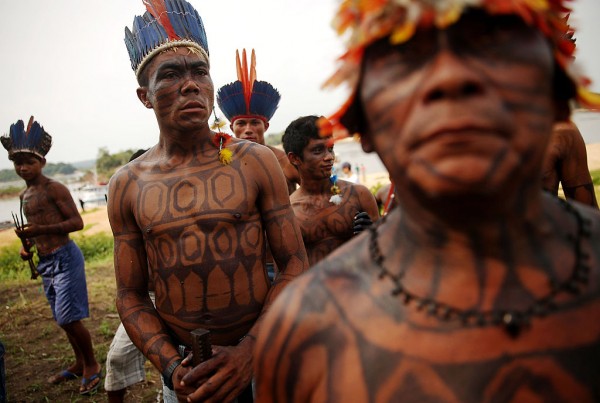 (Photo : Photo by Mario Tama/Getty Images)
SAO LUIZ DO TAPAJOS, BRAZIL - NOVEMBER 27: Members of the Munduruku indigenous tribe gather along the Tapajos River during a "Caravan of Resistance'" protest by indigenous groups and supporters who oppose plans to construct a hydroelectric dam on the Tapajos River in the Amazon rainforest on November 27, 2014 in Sao Luiz do Tapajos, Para State, Brazil.

Life among today's indigenous peoples has always been difficult. They suffer from limited access to resources as well as threats to their ancient territories by increasing urbanization. On the flip side, the same circumstances had made it possible to restrict their diets from the high sugars and fats often present in more industrialized societies.

Pair this with a daily life that regularly puts them through various forms of physical activity and the researchers can only conclude that such activities have eliminated a lot of the usual suspects that trigger brain decay (the most tell-tale sign of developing Alzheimer's).

It is not just brain health either. The same research had also found better cardiac health among the population as well. And given the interconnection between heart and brain, the risks of aging and Alzheimer's are noticeably far more reduced.

The study even went as far as to test if the findings were not undermined by the high risk of other infectious diseases due to poor sanitation and limited access to modern healthcare. But in the end, the results still showed that signs of aging between brains were 70% less pronounced compared to many patients living in Western cities.

Despite such promising findings, any more insights into the health of indigineous peoples is undermined by the present instability in the country. Wildfires in the Tsimane's own side of the Amazon did more than turn up the heat. It added to a political firestorm that forced one of its most recent presidents to resign, followed by chaotic transitions of power to the current leader.

All the while, far-right influence in the country continues to cast its shadow as anti-indigenous discrimination persists. Some groups in the country see the Tsimane as a drain on the economy while their culture is persecuted as 'Satanic.'

With 43% of the country covered by the Amazon, the plight of these people cannot be understated. The study strongly highlights various possibilities on how humans can still live healthily within the bounds of nature without the need to degrade it and push the world further towards catastrophic climate change. Hence, climate action should certainly put a lot of consideration for their welfare and making the most of what they can teach the rest of the world.

Also read: Kids Get Better Quality Sleep Next to Their Pets, Study Suggests