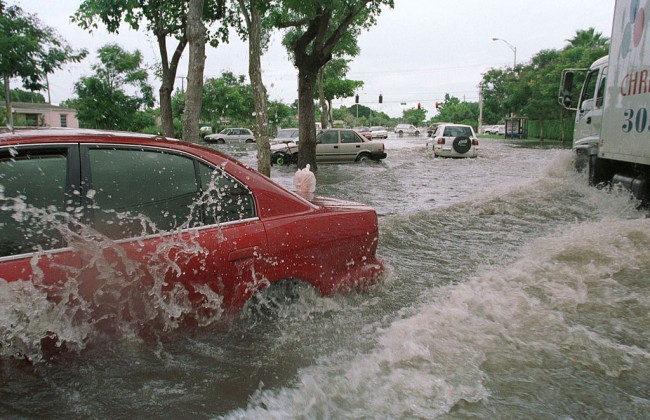 379671 02: Cars and trucks drive down flooded streets October 4, 2000 in Miami after heavy rains from a tropical depression swamped most of the city and left more than 40,000 residents without water or electricity. Florida Governor Jeb Bush declared a state of emergency for Miami-Dade County.
(Photo : Photo by Robert King/ Newsmakers)

Ever since Katrina, the National Hurricane Center (NHC) has been on higher alert and improving its storm monitoring capacity to prevent a repeat of the 2005 disaster. And this week, it has just spotted signs of a developing cyclone somewhere near Bermuda and could mark an early start to America's hurricane season this year.

Officially, hurricane season starts on the 1st of June and ends on the 30th of November. Still, the NHC has already projected that storm activity for the year will be higher than normal and that the possibility of an early start is still well within its projections.

Currently, it is still monitoring the situation and estimates that there is a medium chance of a subtropical development. Even so, the resulting storm shows no indication of making serious landfall and it is still likely that the more dangerous weather activity will show up sometime in August.

The NHC's heightened monitoring in recent years could be attributed to why early signs of hurricane season have been observed in the last seven years. One could say that it reflects the issue of disaster preparation that still haunts public imagination during this time of year. In 2017, Hurricane Harvey swept heavy rainfall between Louisiana and Texas, racking up property damages that surpassed Katrina (albeit with arguably lower casualties).

Thus, even early signs of low-pressure areas and other storm patterns are immediately flagged and monitored for the slightest chance of development (regardless if there is a risk to landfall).

Many have hastily interpreted that early hurricane seasons could be attributed to global warming. But while rising temperatures in places like Africa have indeed caused serious harm and growing famine, climate change's connection to hurricanes still remains considerably more obscure.

This is because hurricanes (along with their typhoon counterparts) are surprisingly more complex. Their formations are the result of a number of wind and weather patterns coming together. Temperature and sea levels are just the tip of the iceberg, let alone the amount of atmospheric carbon in the atmosphere.

On the other hand, the effects of man-made activity has certainly affected the degree of damage that a hurricane can inflict upon a local area. Ecosystems that could have originally survived high-speed winds are now more vulnerable from the loss of trees to deforestation. The same goes for how deforestation leads to higher chances of landslides.

As far as preparedness goes, it is best to focus more on where a hurricane creates severe damage to property. After all, that is where observations for early hurricane season signals come in. It is a major heads up, both for government officials and private citizens while giving everyone ample time to get ready.

This could mean more frequent advisories on evacuation protocols and disseminating information on where to find shelter should your home have a significant chance of flooding. Stocking supplies to bring during evacuation or lockdowns are also highly recommended. In any case, the signs are already there and that is enough reason to start taking action.