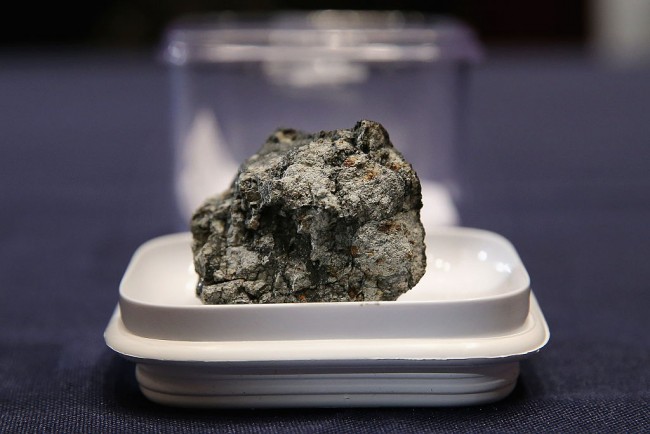 WASHINGTON, DC - JUNE 17: A piece of the Chelyabinsk meteorite is displayed before a hearing of the House Administration Committee in the Longworth House Office Building on Capitol Hill June 17, 2015 in Washington, DC. Famously caught by a number of video cameras, the meteorite fell to earth February 15, 2013 and caused a large amount of damage in the city of Chelyabinsk, Russia.
(Photo : Photo by Chip Somodevilla/Getty Images)

Barring actual time travel, the only way scientists can understand how the Earth was formed is via observing similar occurrences that are still happening in other parts of the galaxy.

This includes not only the way planets and stars interact, but also directly studying the composition of meteorites that have landed on our planet. And recently, one such study from the University of Heidelberg has concluded that noble gases from ancient solar winds could have been absorbed by our planet's core during the very moments of the planet's formation.

Solar winds and the birth of planets

One basic thing to remember is that planets are not generally made without a star forming at the center first. After all, that was how the solar system itself was born. The sun came into being about five billion years ago in a swirling mass of gases and dust. The planets, in turn, were more or less formed from this dust with the densest materials forming the core.

This was further confirmed when geologists study the pattern of earthquakes, leading them to guess that it is at least quite dense down there (with the general consensus being that it is most likely made up of iron).

But even in the midst of this, the sun was undoubtedly alight with activity and solar winds were most likely a common occurrence. Now, according to the Heidelberg study, the traces of these same gases could be found in basalt that came from deep in the mantle.

This was further confirmed by studying rare, iron meteorites that were most likely the result of planets that had failed to form. These had also contained  traces of noble gases that bore the same solar isotopes found in deep-mantle rock.

The presence of these gases could have some importance when it comes to painting the sort of activity that it is still going on deep in the heart of our planet. Here are just a few reasons why:

Earth's magnetic field is probably one of the least commonly understood subjects in geology. The lack of an actual picture of the Earth's core surely does not help either. (In fact, some scientists have gone as far as to dig up old ship records in their attempts to improve research on the field.) Knowing the presence of noble gases mixed in the core could at least fine tune knowledge on this subject matter.

2. It could lead to better measurement of plate movements.

It is not just the core itself that could be influenced by noble gases. The mantle is influenced as well, and it is also these shifts in the mantle's chemistry that trigger tectonic plate movements. And when scientists can better understand these movements, then they can better predict earthquakes.

3. It refines the process of how other planets are made.

The mathematical models that predict the movements between planets and stars can still be different from how they actually take place in the galaxy. There are still too many unknown variables regarding a star's own activity and its effects on a surrounding planet's core formation. But with better understanding of how the solar winds factor in that equation, experts could come up with a more accurate model.

At the end of the day, it just goes to show just how much what lies under our feet is still made up of things that came from beyond the stars.