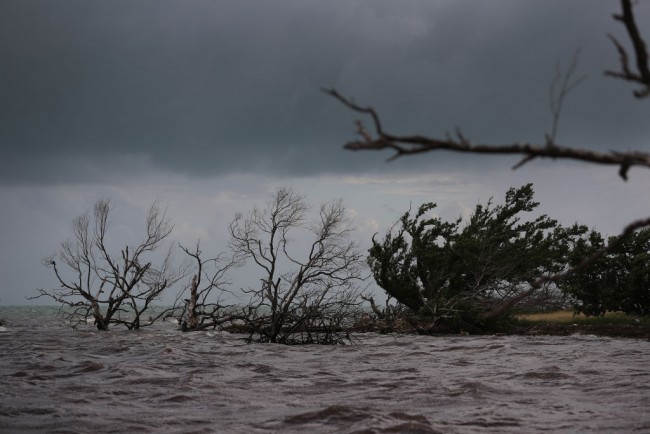 BAHIA HONDA KEY - FLORIDA: OCTOBER 25: Dead trees are seen surrounded by water in the Strait of Florida during the seasonal king tide on October 25, 2019 in Bahia Honda Key, Florida. Researchers estimate that the Florida Keys will likely see increased flooding as sea levels continue to rise due to various factors including global warming.
(Photo : Photo by Joe Raedle/Getty Images)

Ghost trees are what happens when an environment becomes so poisonous, they die while still standing. Such as the case in a number of oceanside groves along the US coast, and one study has found that these ghost forests could actually be contributing to the global carbon footprint.

Most trees cannot actually live in areas where there is high salt content in the soil. Salt makes it difficult for roots to absorb the necessary nutrients to fuel the production of leaves. And without the leaves providing photosynthesis, the tree eventually dies.

Only a few species have adapted ways around this (such as mangroves as well as some tropical species like coconut and palm). In fact, most of the world's largest, natural carbon sinks are made up entirely of land-based forests (like the Amazon).

Unfortunately, as the US study shows, rising sea levels from global warming are encroaching upon these coastline forests, thereby causing salinization in the soil. Worst still, these dead standing trees left behind are simply nothing more than corpses absorbing the carbon in the soil and releasing them into the atmosphere.

Of course, researchers continue to dig deeper into this phenomenon in order to estimate the rate at which America's coastal forests are dying to this radical environmental change. There is also the possibility that an entirely new ecosystem is being made as the rising seawater is turning affected areas into wetlands.

Also read: Forests the Size of France Have Regenerated Since 2000

Why can't ghost trees be cleared?

Logically, it may sound like the best solution to the problem would be to just clear the dead trees before things get worse. Unfortunately, the presence of standing dead trees is a lot more complicated than being carbon emitters.

These same trees could still be home to a number of animal species, as well as several species of fungi that could also be native to the ecosystem. Furthermore, their presence actually contributes to the life cycle of the forest. They may still be standing, but they will eventually decompose and become nutrients for still living trees. Selective burning may also be out of the question, as the area remains too wet for it.

Furthermore, studies are showing that a majority of the carbon being emitted is still being released by the salt-contaminated soil more than the dead trees themselves. If the goal would be to reduce the area's emissions, then it would make more sense to reduce saltwater intrusion.

Sadly, the most conceivable way this can be done is to still reduce the rise in ocean levels as a result of melting glaciers. It could be possible to selectively cull the most badly affected edges of these weakening forests but it will not stop the waters from coming further inland. Another problem would be how these environments would respond to the increasingly intense hurricanes that are also being brought about due to global warming.

All of this points to the reality that unusual environmental change is being brought about by rising global temperatures. As always, taking climate action remains the most viable strategy to reverse the trends.