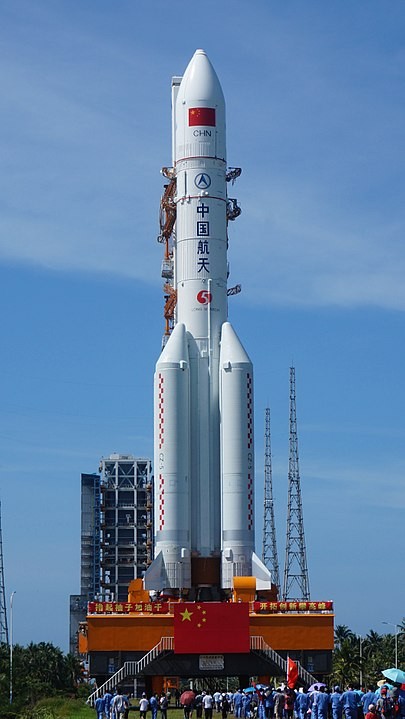 One of China's largest rockets which launched into the low Earth orbit last Wednesday, April 28, is likely to reenter the earth's surface, after a growing interaction in its atmosphere was believed to have dragged it down to fall back to Earth.

The 'uncontrolled reentry' of the said space debris is expected to crash on Earth over a few weeks or so. The huge rocket identified as the Long March 5B was carrying the 22.5-metric-ton Tianhe core module for the Chinese Space Station which will supposedly serve as main living quarters for astronauts as well as propulsion to maintain orbital altitude.

It was speculated that the Long March 5B will eventually deorbit itself, but an observation showed that the giant piece of space junk is 'slowly and unpredictably heading back to Earth'. The 30-meter-long, five-meter-wide Long March 5B core stage is in a 170 by 372-kilometer altitude orbit traveling at more than seven kilometers per second.

Should people worry about the crash-land?

SpaceNews said that the object's orbital inclination of 41.5 degrees means it "passes a little farther north than New York, Madrid and Beijing and as far south as southern Chile and Wellington, New Zealand, and could make its reentry at any point within this area."

It is known that water covers 2/3 of the Earth's surface, and only a small fraction of land is inhabited. However, should the debris crashes on populated areas, experts say it would be the largest instance of uncontrolled reentry of a spacecraft to ever be recorded.

Typically, the biggest threat of space debris is the collision to other spacecrafts in the orbit. Over the years, satellite operators managed a maneuver to avoid collisions. Most of the space debris does survive reentry and burns up in the space's atmosphere. Generally, the chance of space objects reentering Earth and hitting someone is extremely small that you would rather go outside and watch it. However, experts say we cannot say with full certainty what fate awaits with this latest piece of space junk.

Space litters over the years

The Long March 5B is subsequent to a similar Chinese rocket that fell to Earth, landing in the Atlantic Ocean and reportedly left a trail of debris in the African nation of Cote D'Ivoire.

While there was no record of serious damage to life, it is not a guarantee that the recent one is not dangerous. A similar occurrence one year before SkyLab's demise, the Soviet remote sensing (spy) satellite, the Cosmos 954, fell into Earth and spread radioactive debris over several hundred square kilometres in the region of Canada's Northwest Territories. The cleanup operation took months and had cost about C$6 million, which the Soviet Union only paid in half.

As per the 1972 Liability Convention, a UN treaty, the 'launching state' is responsible for the damage caused by their space objects, which the legal framework will apply after the occurrence of damage. In the case of Long March 5B, the liability would potentially fall on China.

While it sounds easier than it actually is, it is imperative that countries around the world work together to nurture and manage a more sustainable space activities in the future.

Also read: Human Waste May Bring Future Astronauts Back from the Moon