The World's Biggest Owls Are Now Endangered: Is it too late to save them?

The world's biggest owl is endangered. Fortunately, it's not yet too late to save it. Native to Russia and parts of Asia, the Blakiston's fish owl is facing a continuous decline in population due to habitat loss and climate change. 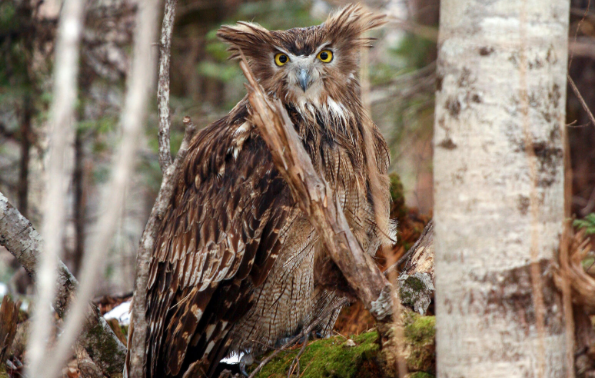 Rada Surmach, a Ph.D. candidate and researcher at the Federal Scientific Center of the East Asia Terrestrial Biodiversity in Vladivostok, has created a long-term conservation plan to reintroduce captive-bred fish owls to the Land of the Leopard National Park in southern Primorye. In this relatively developed region, the fish owl once lived.

Surmach believes that the impressive bird of prey has potential as a flagship species for raising public awareness, similar to the role played by the Siberian tiger or Amur tiger.

"Every time I explain this is the biggest owl, and it lives in our forest," she says, "people get really excited."

Related Article: Vultures Getting Shot, Hanged on Trees Should be Stopped; Experts Suggest These Instead

Staying faithful to its namesake, the giant owls are fishers. They hunt for salmons, trouts, and lamprey in rivers. During cold winters, the owls focus their diet purely on fishes, but amphibians are added to the menu when spring comes. They usually need more food by then to feed their newly hatched chicks.

A changing climate could delay or hasten spring's arrival, causing frogs and other amphibians to emerge too early or too late to sustain hungry fish owl chicks, says wildlife biologist Jonathan C. Slaght, the Wildlife Conservation Society's Russia and Northeast Asia coordinator. The results of such a seasonal mismatch (also called tropic mismatch) could be catastrophic, starving owlets to death and contributing to an eventual population decline.

As the world aims to mitigate climate change, preserve wildlife, and support billions of people, it is continuously being proven that trees are a major contributor to environmental rehabilitation.

Unfortunately, mass destruction of trees (e.g., deforestation) continues, sacrificing the long-term benefits of standing trees for short-term gain. And, among those fatally affected are the Blakiston's fish owl. These owls are in need of optimal living conditions to continue living.

Unexpected climate change effects and the worsening ecological destruction leave thousands, if not millions, of animals displaced from their natural habitats.

Despite facing endangered status, the owl species can still be saved. It has been proven by many animal species that were endangered, if not critically or nearing extinction that recovery is possible. But, the animals alone can not do it by themselves.

Because the cause of the population decline was mostly human activity, that means it would not be easy for the owls to adapt and look for ways to survive naturally.

A great start that conservationists see as a significant step towards saving these animals is habitat rehabilitation. Not only is it a way to rehome displaced animals, but it would also help balance the ecological system back.

Animals play as big a part as humans in maintaining the ecological balance that the planet needs to flourish. It would seem only best to help them survive as much as we do.