Mt. Etna, Europe's highest and most active volcano, is more active than usual during the past few days after being hit by an earthquake. The spectacular continuous eruptions have resulted in dozens of photos surfacing online; many are amazed by the "striking" natural "firework display."

According to a volcanic activity tracking website, Volcano Discovery, a plethora of relatively small earthquakes struck under the eastern flank of Etna on Sunday the 24th. The earthquakes that measured on an average of 2.3 magnitudes took place at around 10 to 20 kilometers (approximately 6 to 12 miles) underground.

Analysts say the quakes suggest that there is a fault zone within the Earth that has been "activated," however the cause of this activation still remains uncertain. Because the quakes were rather relatively weak, it's still unsure if the local inhabitants around the area are affected by the land tremors.

According to Boris Behncke, a volcanologist from INGV-Osservatorio in Sicily, who has been tracking and recording Mt. Etna's volcanic activity over the past few weeks, Etna had unleashed paroxysmal eruptive episodes.

The analyst uploaded photos to Twitter of the event, which saw smoke rising from the volcano's peak coupled with a fiery orange glow. Following days have also seen "fireworks" at the mountain.

In an update yesterday, Behncke tweeted: "Two more moments of # Etna's activity during the night of January 23-24, 2021.

Two more moments of #Etna's activity during the night of 23-24 January 2021. Note that this is very modest, and completely harmless activity taking place at the summit, far away from populated areas. It just looks big because I used a powerful zoom (from 20 km distance) pic.twitter.com/thMWtuVY5g

Behnke reminded everyone not to be worried as the volcanic activities are relatively modest and actually completely harmless. Etna's light and fire displays are taking place at the summit, a safe distance away from populated areas.

Earlier, the volcanologist had said Etna has been "quite active and spectacular at the turn of the year."

Behncke also said that another "conspicuous" swarm hit the area just before the end of last year. 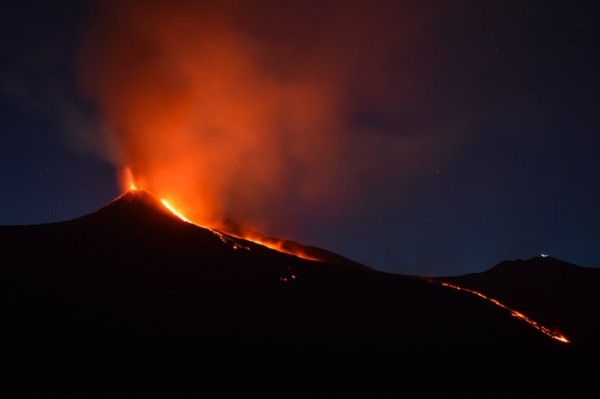 Etna is located on the island of Sicily above the city of Catania. It is thought that over a quarter of the island's population lives in the volcano's slopes, which provide both tourism and good soil for agriculture.

The volcano is the highest and the most active stratovolcano on the continent. The landmass is located in the Metropolitan City of Catania, between the cities of Messina and Catania. It lies above the convergent plate margin between the African Plate and the Eurasian Plate.

Aside from being Europe's most active volcano, Etna is also one of the few that is in an almost constant state of activity. However, it's not necessarily all that bad because the fertile volcanic soils help the healthy agriculture that blooms near the area. It provides nourishment for vineyards and orchards across the lower slopes of the mountain.

Due to its history of recent activity and nearby population, Mount Etna has been designated a Decade Volcano by the United Nations. In June 2013, it was added to UNESCO's list (United Nations Educational, Scientific and Cultural Organization) World Heritage Sites.

Despite the eruptions happening at a safe distance and all the local government's implemented safety measures, Mt. Etna is still an active volcano whose beauty deserved to be appreciated at cautiously.